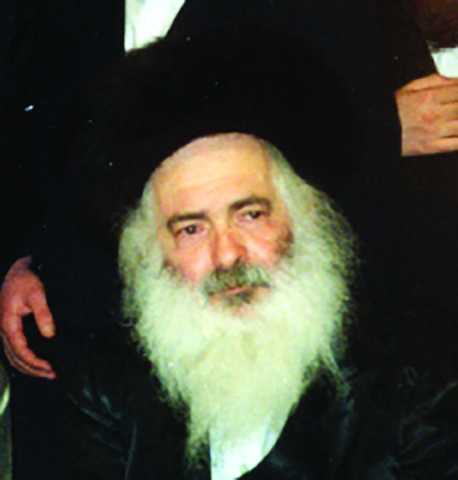 In 5501/1740, the Jews of Chevron were saved from a harsh decree. The pasha had ordered them to come up with 50,000 piasters or face expulsion and degradation. After three days of prayer and fast, the astronomical sum miraculously turned up on the shul’s windowsill, found by the shamash when he arrived in the morning; it was handed over to the greedy pasha. Chevron’s “Purim Taka,” or “Window Purim,” commemorates the event.

Harav Alter Menachem Mendel Biderman was the fourth son of the Lelover Rebbe, Harav Moshe Mordechai. He was born in 5695/1935 into a home steeped with Torah and yiras Shamayim.

The eagerness with which Reb Alter served Hashem became apparent when he was very young, and remained with him all his life.

In his youth he learned at Yeshivas Tiferes Tzion in Bnei Brak, the Chazon Ish’s yeshivah. He used to take walks with the Chazon Ish, discussing Torah with him and asking him questions regarding halachah.

In 5718/1958, Reb Alter married the daughter of Harav Shimon Aharon Hershkowitz, zt”l. In the early years of his marriage, he learned at the Breslover kollel and also studied Kabbalah regularly with other Gedolei Torah during the early morning hours.

He was always exceptionally careful in matters of sanctity.

After Reb Alter founded a beis medrash on Rabbi Akiva Street in Bnei Brak in 5725/1965, his father moved from Tel Aviv to Bnei Brak and davened there for the rest of his life.

Reb Alter was very attached to his father and accompanied him wherever he went. He was a paragon of kibbud av. After his father’s petirah, he referred to him as “der Rebbe, zt”l,” not as “der Tatte.”

When his mother passed away in 5738/1978, he set up Kollel Ohr Menachem, where dozens of avreichim still learn every day.

Following the petirah of his father on 24 Teves 5747/1987, Reb Alter was appointed one of his successors as Rebbe in Bnei Brak.

On 14 Teves 5761/2001, he conducted a yahrtzeit tisch in memory of his grandfather, Harav Moshe of Lelov. It was close to 2:00 a.m. Suddenly he felt ill and asked for a cup of water; after reciting Shehakol he was niftar.

Reb Alter was buried on Har Hazeisim, near the other Rebbes of the Lelover dynasty.

In 1773, the first public museum in America was organized in Charleston, South Carolina.

In 1828, the United States and Mexico signed a Treaty of Limits defining the boundary between the two countries to be the same as the one established by an 1819 treaty between the U.S. and Spain.

In 1896, students at Davidson College created the first X-ray photographs to be made in America.

In 1991, the U.S. Congress passed a resolution authorizing President Bush to use military power to force Iraq out of Kuwait.