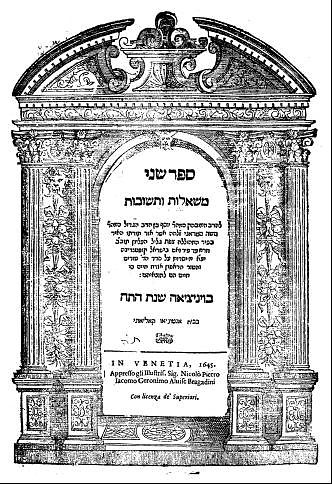 A yom tov is cited in Megillas Taanis, due to the destruction of the book of laws of the Tzedokim, which opposed the true mesorah of Torah sheb’al peh.

Harav Yosef of Trani was born in Tzfas to Harav Moshe, zt”l, the Mabit. He learned under Harav Shlomo Sagis, zt”l.

When he was just 12 years old his father was niftar. Nevertheless, he continued to thrive in his learning; at a very young age he knew the entire Shas by heart. He reviewed Shas many times, and it was said of him that he even knew how many letters were contained in it.

The leaders of the Tzfas community chose Rav Yosef as their emissary to collect funds for them overseas. Arriving in Constantinople, Rav Yosef was asked by the kehillah there to stay on as their Rav. He agreed, remaining there for a number of years. Among his many talmidim were Harav Yehoshua Benbenishti and his brother Harav Chaim, the mechaber of the Knesses Hagedolah; Harav Chaim Algasi; Harav Yitzchak Alfandri; and Harav Yosef Katzkbi, zecher tzaddikim livrachah.

Rav Yosef was supported by two local affluent Jews so that he would be free to teach Torah.

In 1985, the legendary Route 66, which originally stretched from Chicago to Santa Monica, California, passed into history as officials de-certified the road.

In 1990, NASA announced that a flaw in the orbiting Hubble Space Telescope was preventing the instrument from achieving optimal focus. (The problem was traced to a mirror that had not been ground to exact specifications; corrective optics were later installed to fix the problem.)