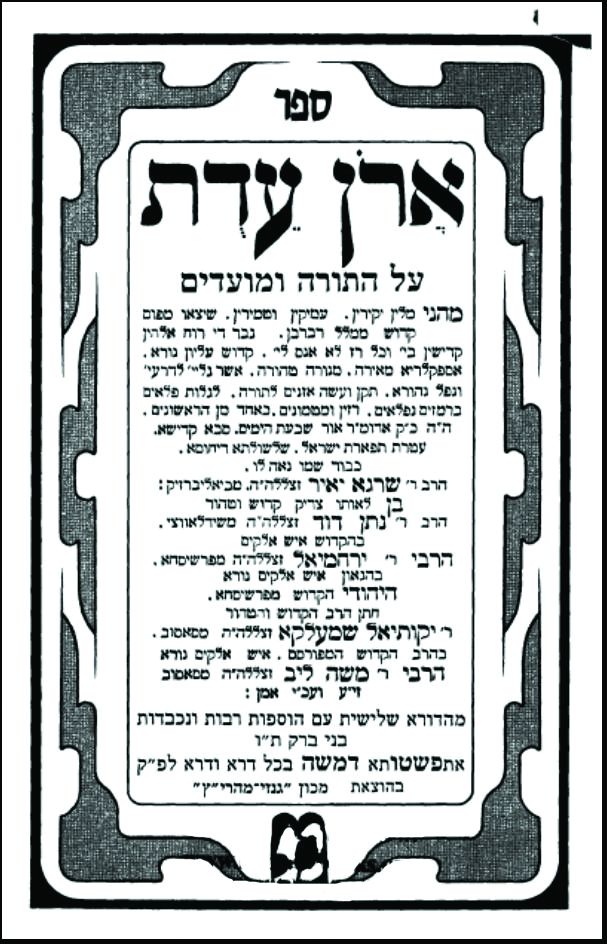 In 5001/1241, the first pogrom in Frankfurt-on-Main took place when an incited mob destroyed the Jewish quarter and massacred most of its Jews al kiddush Hashem. Hy”d.

Following the petirah of his father on 7 Cheshvan 5626/1865, Reb Shraga Yair was appointed Rebbe first in Shidlovtza and later in Biala’varzig.

After a fire broke out in Biala’varzig and destroyed most of the city, Reb Shraga Yair moved to Radom and from there back to Shidlovtza, where he was niftar on 13 Sivan 5672/1912 at the age of 72.

He was succeeded by his only son, Harav Nosson Dovid.

His daughter married Harav Chaim Elazar Schapira of Munkacs, but they were divorced because they did not have children; she remarried Harav Chaim Hager of Antiniya. Reb Shraga Yair had another son-in-law, his nephew, Harav Yosef Eliezer of Radom.

In 1770, Captain James Cook, commander of the British ship Endeavour, discovered the Great Barrier Reef off Australia by running onto it.

In 1942, the United States and the Soviet Union signed a lend-lease agreement to aid the Soviet war effort in World War II.

In 1959, the Saunders-Roe Nautical 1, the first operational hovercraft, was publicly demonstrated off the southern coast of England.

In 1962, three prisoners at Alcatraz in San Francisco Bay staged an escape, leaving the island on a makeshift raft; they were never found or heard from again.

In 1963, Clergyman Thich Quang Duc set himself afire on a Saigon street to protest the government of South Vietnamese President Ngo Dinh Diem.

In 1987, Margaret Thatcher became the first British prime minister in 160 years to win a third consecutive term of office as her Conservatives held onto a reduced majority in Parliament.

In 1993, the U.S. Supreme Court ruled that people who commit “hate crimes” motivated by bigotry may be sentenced to extra punishment; the court also ruled religious groups had a constitutional right to sacrifice animals in worship services.

In 2001, Timothy McVeigh, 33, was executed by injection at the federal prison in Terre Haute, Indiana, for the 1995 Oklahoma City bombing that killed 168 people.