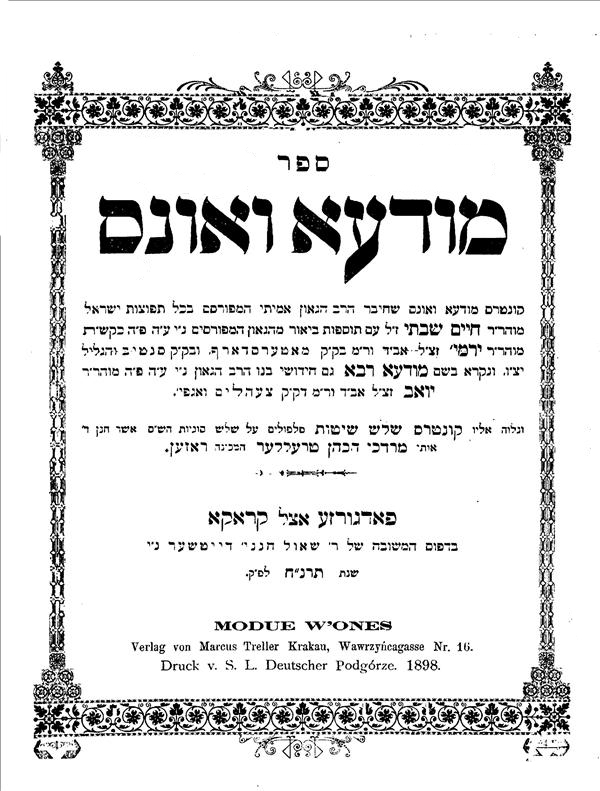 In 2044, the bris milah of Avraham Avinu took place, according to the Midrash.

In 3214, King Chizkeyahu was gravely ill. Three days before the fall of Sancheriv, Yeshayah Hanavi visited the king to tell him that he would die. Chizkiyahu Hamelech davened to Hashem, and 15 years were added to his life.

In 3405, the decree of Haman was publicized, and Mordechai and Esther ordered a three-day fast for all the Jews.

In 5248/1488, Rabbeinu Ovadia Bartenura reached Yerushalayim after a three-year journey.

Harav Chaim Shabsi was the son of Rav Shabsai. He was born in Saloniki before 5315/1555 (the exact year of his birth isn’t known).

Rav Chaim married at a relatively young age, but his wife passed away childless. He remarried, and from his zivug sheini he had four sons, all talmidei chachamim.

Rav Chaim was appointed Dayan and also founded a yeshivah in Saloniki.

In 5375/1615, following the petirah of Harav Shmuel Florentin, zt”l, Rav and Rosh Yeshivah of Yeshivat Shalom, Rav Chaim was appointed to both positions.

In 5398/1638, Rav Chaim was appointed Chief Rav of Saloniki. During his tenure he enacted many takanos for the betterment of Yiddishkeit in the city.

Thousands of halachic she’eilos were sent to him from distant kehillos; his teshuvos were printed in various sefarim of his era. He also wrote chiddushim on nearly the entire Shas, which he wished to publish during his lifetime, but this was not to be. His sons published part of his writings after his petirah, though unfortunately many of his manuscripts were lost. Among the sefarim that were published include Iguna D’itsa and Moda’ah v’Oness, on those complex halachos.

Rav Chaim served as Rav of Saloniki until his petirah, and was actively involved in halachic rulings in the city even near the end of his life.

He was succeeded as Rav by his son Rav Moshe who, with his younger brother Rav Shabsai, published Sheilos u’Teshuvos Maharchash in 5411/1651.

In 1775, Paul Revere began his famous ride from Charlestown to Lexington, Massachusetts, warning colonists that British Regular troops were approaching.

In 1906, a devastating earthquake struck San Francisco, followed by raging fires; estimates of the final death toll range between 3,000 and 6,000.

In 1934, the first laundromat, called a “washateria,” opened in Fort Worth, Texas.

In 1978, the Senate approved the Panama Canal Treaty, providing for the complete turnover of control of the waterway to Panama on the last day of 1999.

In 2013, the FBI released surveillance camera images of two suspects in the Boston Marathon bombing and asked for the public’s help in identifying them.