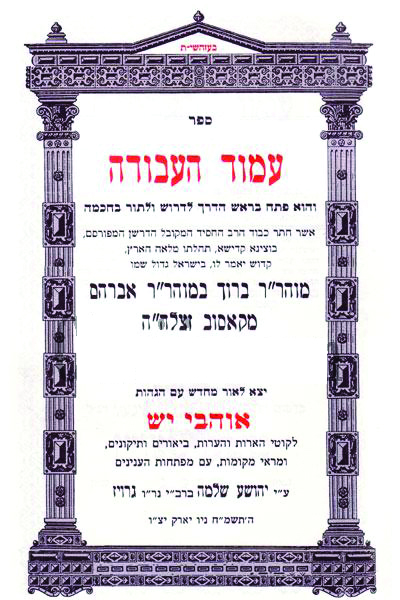 Rav Baruch of Kossov, a devoted talmid of Harav Menachem Mendel of Premishlan, zy”a, served as the maggid of Kossov.

His talmid Harav Aryeh Leib of Butshan, zt”l, relates that “hearing about his drashos is not like actually hearing [them directly], when one could see fiery sparks emanating from his mouth as he taught Torah to Bnei Yisrael.”

He settled in Kossov in order to eradicate the persistent heretical influence brought about by Shabsi Tzvi. He also traveled around the neighboring towns and villages to arouse Yidden to become closer the Hashem, and to spread Toras haChassidus.

The mochiach of Kossov, as he was known, was a well-known figure of the time. He was a tzaddik honored in all circles, receiving glowing haskamos for his sefarim from both chassidishe and misnagdish Rabbanim. Among those who gave haskamos were the son and son-in-law of the Pnei Yehoshua, and the son of the Chacham Tzvi.

Rav Baruch was the mechaber of Yesod Ha’emunah and Amud Ha’avodah, actually two parts of one sefer. In them he brings divrei Torah from the Baal Shem Tov, the Maggid, Harav Mendel of Premishlan, Harav Nachman of Kossov, and Harav Leib Pistiner, zecher tzaddikim livrachah, among others. Rav Baruch was fluent in Toras haKabbalah, as is evident from his sefarim.

His sefarim, sifrei hayesod in Chassidus, continue to have a lasting influence.

The sefarim were not printed until over 70 years after his petirah. They were recently republished in an enhanced format.

Rav Baruch of Kossov was niftar on 13 Cheshvan of either 5542/1781 or 5543/1782. His son-in-law was Harav Avraham Katz, zt”l, the maggid meisharim of Butshan. His sons were Harav Yosef, who began to print his father’s sefarim, and Harav Avraham, whose son Harav Moshe actually brought these sefarim to print in Tchernowitz in 5614/1853.

In 1620, 41 Pilgrims aboard the Mayflower, anchored off Massachusetts, signed a compact calling for a “body politick.”

In 1918, fighting in World War I ended as the Allies and Germany signed an armistice in the Forest of Compiegne.

In 1966, Gemini 12 blasted off on a four-day mission with astronauts James A. Lovell and Edwin “Buzz” Aldrin Jr. aboard; it was the tenth and final flight of NASA’s Gemini program.

In 1998, President Clinton ordered warships, planes and troops to the Persian Gulf as he laid out his case for a possible attack on Iraq. Iraq, meanwhile, showed no sign of backing down from its refusal to deal with U.N. weapons inspectors.