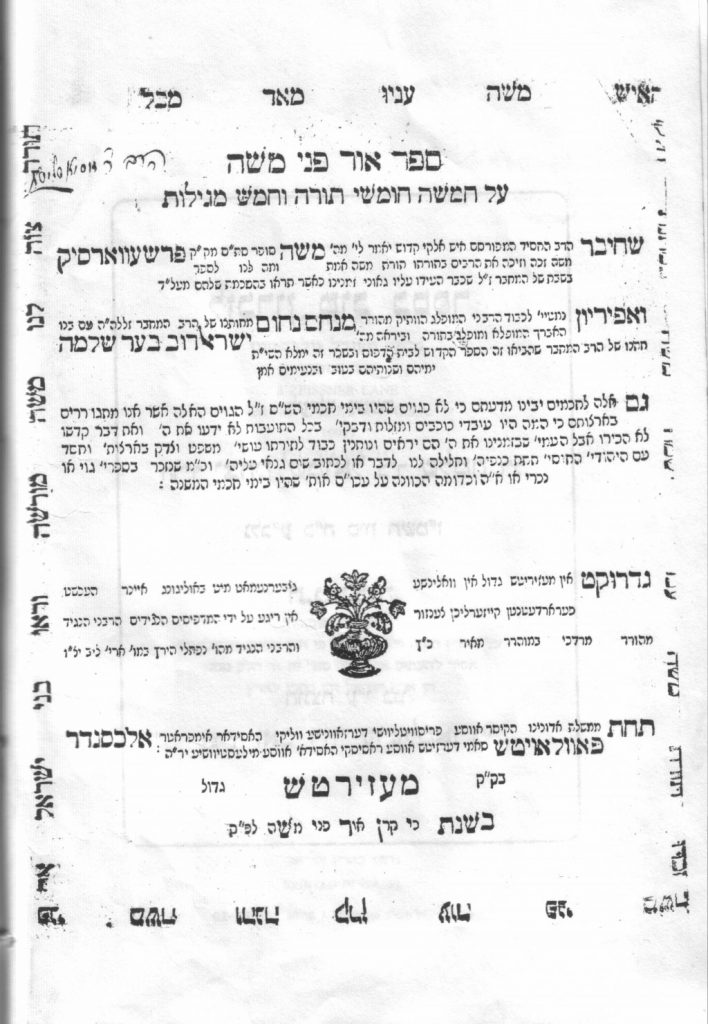 In 3339/423 B.C.E., “In the tenth year, in the tenth month, on the twelfth of the month, the word of Hashem came to me, saying, ‘Son of Man, direct your face towards Pharaoh, king of Egypt … who has said, “Mine is my river, and I have made myself [powerful]” … Then all the inhabitants of Egypt will know that I am Hashem … It will be the lowest of the kingdoms…’” (Yechezkel 29)

In 4763/1002, a violent earthquake rocked Eretz Yisrael, causing serious damage to the chomah around Yerushalayim and to Migdal Dovid.

Harav Moshe of Pshevorsk was born c. 5480/1720 to Harav Yitzchak (according to others, Harav Levi). In his youth he became a devoted talmid of the Maggid of Mezritch, the Rebbe Reb Ber. After the Maggid’s petirah, Reb Moshe became a Chassid of the Rebbe Reb Elimelech. He resided in Pshevorsk (south of Lizhensk) in Galicia, a province of Poland.

In Reb Moshe’s early years he was a melamed tashbar. He was known as an exceptional sofer and wrote sifrei Torah and tefillin for many tzaddikim and Rebbes. The Rebbe Reb Elimelech ordered tefillin from him while he was still a melamed, but he would not take away time from his talmidim; Reb Elimelech sent his son, Reb Elazar, to fill in for him as melamed so he could write the tefillin.

The Rebbe Reb Zusha said that when Reb Moshe studied Torah, his face would look like the face of a malach, and that when he wrote sta”m, “a spark would fly from the osiyos.”

Reb Moshe refused to accept any rabbinical position. He was exceedingly humble and hid his ways in avodas Hashem, as the holy Chozeh of Lublin writes: “He was ‘hatzneia leches’ to the point that no one knew that he was a learned man. I knew him; in my youth I was a talmid of his, and I drank from his well. I knew that everything he did was l’shem Shamayim … He was on such an exalted madreigah that the holy Alshich used to reveal himself to him.”

Reb Moshe’s sefer, Ohr Pnei Moshe, has over 50 haskamos from the greatest tzaddikim of that generation, all of whom attest to Reb Moshe’s greatness and extraordinary tzidkus. The sefer, based on the works of the holy Alshich, was printed posthumously.

He was niftar in Pshevorsk on 12 Teves, and is buried there.

In 1861, Florida became the third state to secede from the Union.

In 1920, the League of Nations was established as the Treaty of Versailles went into effect.

In 1967, President Lyndon B. Johnson, in his State of the Union address, asked Congress to impose a surcharge on both corporate and individual income taxes to help pay for his “Great Society” programs as well as the war in Vietnam.

In 1994, President Bill Clinton, attending a NATO summit meeting in Brussels, Belgium, announced completion of an agreement to remove all long-range nuclear missiles from the former Soviet republic of Ukraine.