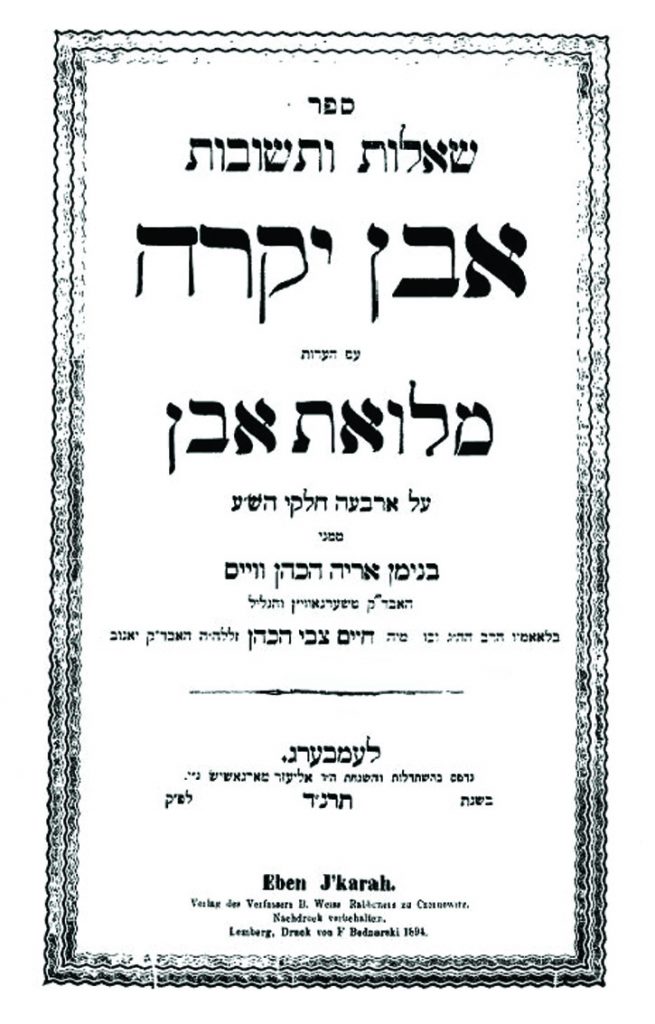 In 3339, “In the tenth year, in the tenth month, on the twelfth of the month, the word of Hashem came to me, saying: Son of Man, direct your face towards Pharaoh, king of Egypt … who has said, ‘Mine is my river, and I have made myself [powerful]’ …Then all the inhabitants of Egypt will know that I am Hashem … It will be the lowest of the Kingdoms …” (Yechezkel 29).

In 4763/1002, a violent earthquake rocked Eretz Yisrael, causing serious damage to the chomah around Yerushalayim and to Migdal Dovid.

Harav Binyamin Aryeh Weiss, Zt”l, Rav of Tchernowitz and Mechaber of Even Yekarah

Harav Binyamin Aryeh Hakohen Weiss was the son of Harav Chaim Tzvi, zt”l, Rav of Yanov. He was an outstanding genius, fluent in all facets of the Torah.

In Tchernowitz, Rav Binyamin Aryeh taught many talmidim and gave many shiurim. He was renowned for his spellbinding drashos and was sought after by people who wanted to discuss all manner of issues with him.

Rav Binyamin Aryeh was well respected by the local government and its leaders. Through his connections with them, he was able to arrange many favors for the local Yidden.

He wrote a number of sefarim on the Torah, on Shas and his she’eilos u’teshuvos; this last is known as Even Yekarah.

In 1803, the Louisiana Purchase was completed and ownership of the territory was formally transferred from France to the United States.

In 1860, South Carolina became the first state to secede from the Union. All 169 delegates to a special convention in Charleston voted in favor of separation.

In 1879, Thomas A. Edison privately demonstrated his incandescent light at Menlo Park, N.J.

In 1963, the Berlin Wall was opened for the first time to West Berliners, who were allowed one-day visits to relatives in the Eastern sector.

In 2001, the U.N. Security Council authorized a multinational force for Afghanistan.