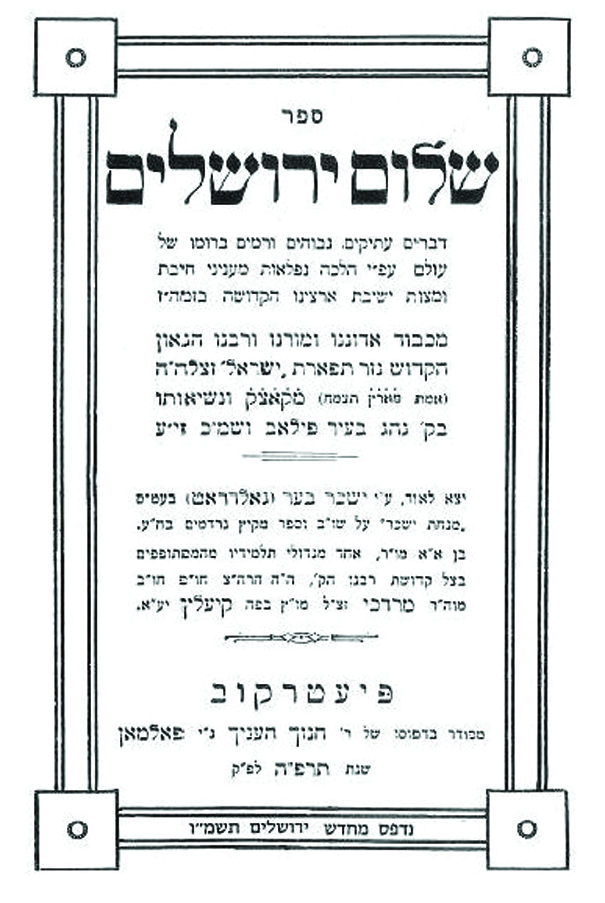 In 5751/1991, the Israeli army launched an operation to evacuate Jews stranded in Ethiopia. Within 33 hours, 15,000 people were rescued and brought to Israel.

5552/1792, Harav Dovid Pardo of Sarajevo, zt”l, mechaber of Shoshanim L’Dovid, Chasdei Dovid on the Tosefta, and Maskil L’Dovid on Rashi

Harav Chaim Yisrael Morgenstern was born in Kotzk in 5600/1840. His father, Harav Dovid, was a son of the Kotzker Rebbe.

Although by the time Rav Chaim Yisrael was born the Kotzker was already spending most of his time secluded in his room, the Rebbe still took an interest in the chinuch of his grandchildren, Harav Yehoshua and his younger brother, Harav Chaim Yisrael. Every Shabbos they would go into his room and tell their grandfather the Rebbe what they had learned.

At age 15, Reb Chaim Yisrael married the daughter of Harav Yitzchak Zelig Frenkel, a Kotzker Chassid. After his marriage, he remained in Kotzk, near his grandfather; and following the latter’s petirah, at the court of his father, Reb Dovid, whom he served as assistant.

Following the petirah of his father on 22 Tammuz 5633/1873, some of the Chassidim went to the youngest son, Harav Tzvi Hirsch of Lomza; but most, including the elders who still remembered the Rebbe Reb Bunim of Peshis’cha and the Kotzker Rebbe, followed Reb Chaim Yisrael. His older brother, Reb Yehoshua, also became his Chassid.

Reb Chaim Yisrael was true to the Kotzker ways, always seeking the truth. In his middas ha’emes he was careful not to imitate even the ways of his father or grandfather; rather, he blazed his own path.

Shortly after his move from Kotzk to Pilov, in 5648/1888, Reb Chaim Yisrael published Shlom Yerushalayim, a collection of six essays on the mitzvah of yishuv Eretz Yisrael in Halachah, Chassidus and Kabbalah.

He also wrote down the divrei Torah of his father, under the name Ahavas Dovid.

His sons were Harav Tzvi Hirsch of Lukova; Harav Yitzchak Zelig, Rav in Sokolov; Harav Moshe Mordechai of Pilov; and Harav Avraham Yosef, who served as Rav in Kotzk.

In 1809, Sweden adopted a new constitution.

In 1924, the German Reichstag accepted the Dawes Plan, an American plan to help Germany pay off its war debts.

In 1932, in the U.S., the first federal tax on gasoline went into effect. It was a penny per gallon.

In 1944, during World War II, Allied forces stormed the beaches of Normandy, France, on “D-Day” as they began the liberation of German-occupied Western Europe.