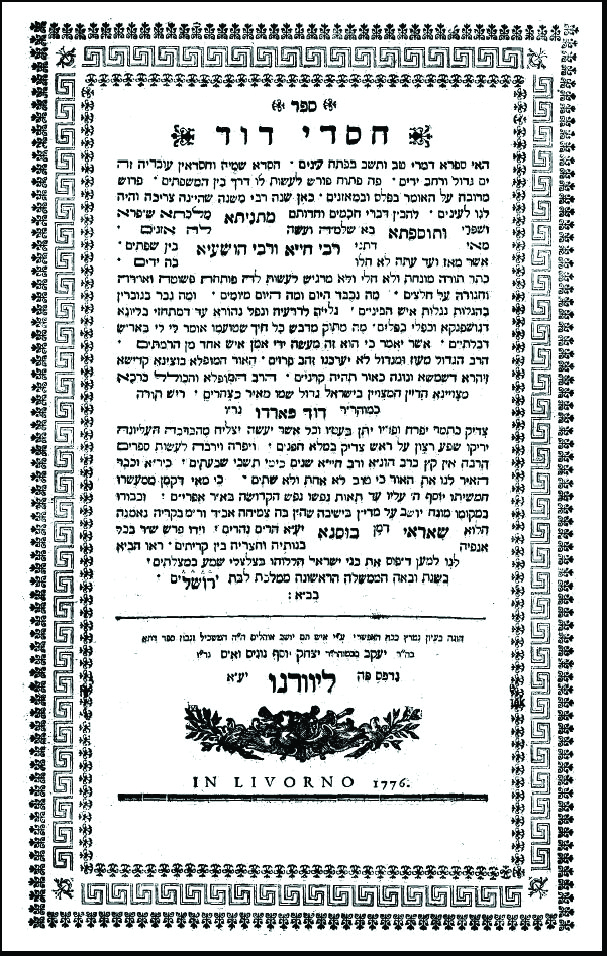 In 5751/1991, the Israeli army launched an operation to evacuate Jews stranded in Ethiopia. Within 33 hours, 15,000 people were rescued and brought to Israel.

When he was just a young boy, both his father Rav Yaakov and his mother passed away, leaving him and his sister Rachel orphans with no one to tend to their needs.

When their relative Rav Moshe Ashkenazi, a wealthy man, saw their plight, he took them into his home. Childless himself, he treated them as his own children. He made sure that they received a sound chinuch; Rav Dovid writes that it is thanks to Rav Moshe that he achieved what he did in Torah.

In the kehillah of Ispaltro near Delmatzia, a famous community, the Rav at the time was Harav Avraham Dovid Papo. Rav Dovid went to learn under him and grew great in Torah. Following the petirah of Rav Avraham Dovid, all eyes turned to Rav Dovid to take Rav Papo’s place.

Initially, he refused the prestigious offer but later he accepted it, and despite his youth, he was considered a leader and an accepted posek for the city.

Rav Dovid founded a yeshivah there which attracted many of the foremost bachurim.

In 5511/1751 Rav Dovid returned to Venice, where he published his two-volume work, Shoshanim L’Dovid on Mishnayos.

In 5528/1768 Rav Dovid was appointed Rav of Sarajevo. This appointment was approved by Harav Refael Eliezer Nachmias, Chief Rabbi of Saloniki.

In 5542/1782, at the age of 64, Rav Dovid moved to Yerushalayim. There he served as Rosh Yeshivah of Yeshivas Chessed L’Avraham.

Rav Dovid was niftar on 12 Sivan 5552/1792, at the age of 74. He was survived by three sons: Rav Yaakov, Rav Yitzchak, who replaced his father as Rav of Sarajevo, and Rav Avraham, who was the son-in-law of the Chidah. His son-in-law was Harav Avraham Pinso of Sarajevo.

In 1692, the first official execution resulting from the Salem witch trials in Massachusetts took place as Bridget Bishop was hanged.

In 1864, the Confederate Congress authorized military service for men between the ages of 17 and 70.

In 1942, during World War II, German forces massacred 173 male residents of Lidice, Czechoslovakia, in retaliation for the killing of Nazi official Reinhard Heydrich.

In 1944, German forces massacred 642 residents of the French village of Oradour-sur-Glane.

In 1964, the Senate voted to limit further debate on a proposed civil rights bill, shutting off a filibuster by Southern senators. (The Civil Rights Act of 1964 went on to win congressional approval and was signed by President Lyndon Johnson.)

In 1967, the Six-Day War ended as Israel and Syria agreed to observe a United Nations-mediated cease-fire.