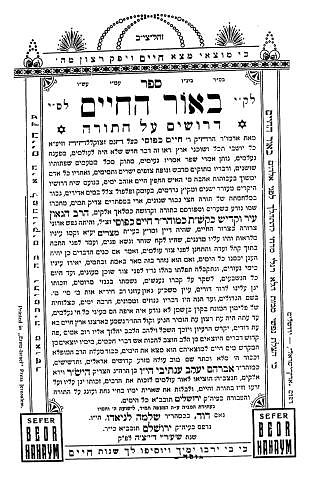 In 5701/1941, Nazis provoked the first anti-Jewish riots in Amsterdam, but the Jews successfully fought off their attackers.

In 5703/1943, Jews in the Warsaw ghetto put up their first resistance to the Nazi effort to liquidate them. The Nazis retreated, only to return three months later when the Warsaw uprising started.

Harav Chaim Kapusi was born about 5300/1540 in Algiers. His father was Harav Yitzchak, zt”l. In his early years the family moved to Egypt, where he learned in the yeshivah of Harav Yosef Beirav.

Harav Chaim came to be one of the noted talmidei chachamim in Egypt, and his rulings in halachah were accepted all over.

Harav Chaim was well versed in both the revealed and the hidden Torah. He was especially close to Harav Yosef Bagiliar, zt”l, who studied with the Arizal in Tzfas. This kesher with Rav Yosef brought him into contact with the Gurei Ari, the close talmidim of the Arizal.

Rav Chaim Kapusi was renowned as a miracle worker, most notably because of a certain incident. He served as a Dayan in Egypt. Once, certain people in the community felt his ruling in a particular case was erroneous and began speaking against him. “Rav Chaim must have accepted bribery,” they said. Shortly afterwards Rav Chaim became blind. Since the Torah says, “bribery blinds the eyes of the wise,” he was thus being punished justly, they claimed.

Rav Chaim davened to Hashem with all his heart, begging Him to remove the shameful stigma from him. One day he declared in public, “If it is true that I accepted bribery,” he exclaimed, “then let me continue to be blind until the day I die. But if the allegations are false, let Hashem restore my eyesight!”

To the amazement of all, Rav Chaim’s sight was suddenly restored. He even addressed those present by name, to show that his vision had indeed returned. From then on Rav Chaim signed his name “Hashem nisi, Chaim Kapusi,” to commemorate the great miracle that took place.

The people who had suspected him hung their heads in shame and accepted his rulings unquestioningly. Many flocked to him to receive brachos.

Harav Chaim wanted to move to Eretz Yisrael, but this plan never materialized and he was niftar in Egypt at the age of 91. He was buried in the Jewish cemetery of Cairo. On his yahrtzeit, many gather at his kever to daven and some even have the custom to pour oil on his kever.

In 1943, during World War II, Jews in the Warsaw Ghetto launched their initial armed resistance against the Nazis.

In 1957, a trio of B-52s completed the first nonstop, round-the-world flight by jet planes, landing at March Air Force Base in California after more than 45 hours aloft.