This Day In History 12 Kislev/December 12

In 5427/1666, Shabsai Tzvi’s primary public relations figure, Nathan of Gaza, who had not followed his master into Islam, was excommunicated by the rabbinical council in Constantinople. 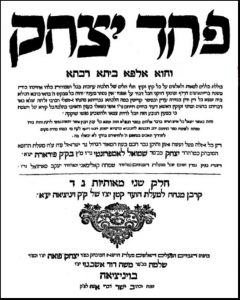 Harav Yitzchak Lampronti was born in the Italian city of Ferrara on 21 Shevat 5439/1679. His father, Rav Shmuel, was a successful businessman there. Realizing that the child was gifted, Rav Shmuel hired a private melamed when he was just three years old.

Rav Shmuel was niftar when Yitzchak was six. Subsequently, his mother supervised his chinuch. At eight years old, she took him to the yeshivah of the Rav of the town, Harav Shabbattai Elchanan Recanati, where Yitzchak excelled in his studies.

At 14 he was sent to the yeshivah of Harav Manoach Provencal, in Lugo. Later he attended the yeshivah in Padua, where he also studied medicine, becoming an excellent physician.

At age 22, Rav Yitzchak returned to his native Ferrara, where he was appointed Chaver, a title of honor given at the time, in the local yeshivah.

Meanwhile, he gained fame as a physician; many prominent Italian noblemen were among his patients.

Many Rabbanim sent questions in halachah or Gemara to Rav Yitzchak. He was also an inspirational darshan.

When Harav Shabbattai Elchanan Recanati was niftar, Rav Yitzchak was chosen as his successor. Shortly afterwards he was appointed Rosh Yeshivah of the Yeshivah of Ferrara.

Rav Yitzchak lived a modest life and gave most of his earnings to tzedakah. He supported the yeshivos in his community and provided for many needy talmidei chachamim.

He was also largely responsible for the building of the famed Sephardic shul in Ferrara and donated a beautiful marble aron kodesh.

Rav Yitzchak is best known for Pachad Yitzchak, a Talmudic encyclopedia which deals with all Talmudic subjects in alphabetical order. Included are the decisions of the great rabbinical authorities of previous generations and of his generation as well. He also collected and included many maamarei Chazal and other Midrashic material.

Rav Yitzchak was niftar on 12 Kislev 5517/1756. He was buried in the Jewish cemetery of Ferrara, but no matzeivah marks his resting place. This was because half a year earlier, the pope had issued an order forbidding Jews to erect matzeivos, at the same time ordering the already standing ones to be destroyed.

Over a century later, in 5632/1872, the citizens of Ferrara, Jews and non-Jews, took up a collection to set up a plaque on the house where he had lived. Some of the inscription on this memorial tablet reads (in Italian): “In this house lived Yitzchak Lampronti, born in 1679, died in 1756. He was a most celebrated physician and theologian…”

In 1787, Pennsylvania became the second state to ratify the U.S. Constitution.

In 1925, the first motel — the Motel Inn — opened in San Luis Obispo, California.

In 1946, a United Nations committee voted to accept a six-block tract of Manhattan real estate offered as a gift by John D. Rockefeller Jr. to be the site of the U.N.’s headquarters.

In 1963, Kenya became independent of Britain.