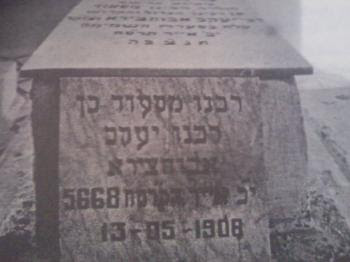 In 5162/1402, the pope granted certain liberal privileges to the Jews of Rome.

Rav Masoud learned under his father, and was the chavrusa of Harav Shlomo Chayun.

Besides the regular seder of learning Shas and poskim, he had a special seder for learning kabbalah with his father.

After the petirah of his father, on 20 Teves 5640/1880, Harav Masoud, as the oldest son, was appointed Rav in Tafilalet in his stead.

As Rav of the kehillah, Rav Masoud enacted many takanos and ran his kehillah with an iron hand. He could not be swayed by even the richest member.

Rav Masoud delivered many drashos, usually imploring the community to maintain the chinuch of their children, to make sure they were all educated in the ways of Torah and yiras Shamayim.

Rav Masoud was renowned for his avodas Hashem, most notably his tefillos.

It is related that the night after his kevurah, the local non-Jews came to the cemetery and desecrated his kever. In the morning, when the matter was revealed, the community reacted with shock and anguish over the disgrace to their Rav. This only added to their sorrow.

The next day, Rav Masoud appeared in a dream to his son Harav David, and told him that they should not be upset or concerned over what had happened, for he needed this as a certain tikkun. Rav Masoud added that one of those in the chevrah kaddisha who dealt with his kevurah committed on that day a certain aveirah — and he specified which aveirah. Since this man had touched him during the kevurah, he had to have the tikkun of the kever being desecrated, to erase the effect of the aveirah. When they checked into the matter, the member of the chevrah kaddisha owned up to committing the aveirah.

In 1921, Sweden’s Parliament voted to abolish the death penalty.

In 1945, President Harry S. Truman announced on the radio that Nazi Germany’s forces had surrendered, and that “the flags of freedom fly all over Europe.”

In 1996, South Africa took another step from apartheid to democracy by adopting a constitution that guaranteed equal rights for blacks and whites.