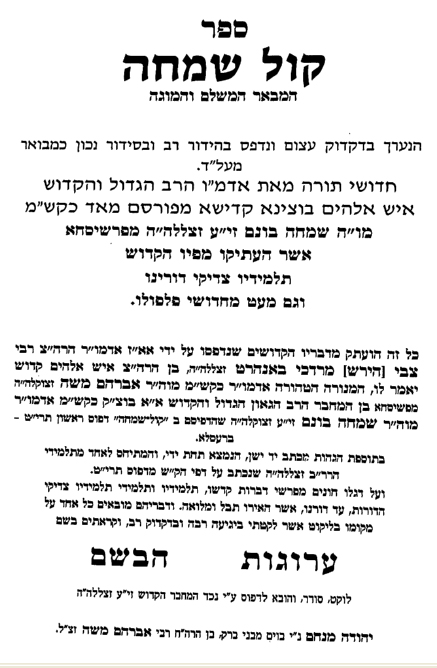 In 5492/1732, the Pope renewed anti-Jewish restrictions of the Roman Jewish community.

Harav Simchah Bunim was born in 5525/1765 in the city of Voidislav. His father, Harav Tzvi Hirsch, zt”l, known as the Maggid of Voidislav, wrote several sefarim, including Asarah l’Meah and Eretz Tzvi.

His mother, Rebbetzin Sarah, a”h, was the daughter of Harav Betzalel of Zolkova, zt”l, mechaber of Beshem Betzalel on Pirkei Avos. Rav Simchah Bunim was born into a non-chassidic family. In fact, it was against his father’s advice that he became attached to Chassidus.

He learned in the yeshivos of Harav Yirmiyahu of Mattersdorf, zt”l, in Austria, and of Harav Mordechai Bennet of Nikolsburg, zt”l. After returning to Poland, he was drawn by Harav Moshe Leib Sassover, zy”a (along with his Rebbe, the Yehudi Hakadosh, zy”a) to Chassidus. He traveled to the Chozeh of Lublin, becoming one of his closest Chassidim. When the Yehudi Hakadosh moved to Pershischa and opened his own court, Rav Simchah Bunim came with him, returning to his hometown.

After the Yehudi Hakadosh was niftar on 19 Tishrei 5574/1813, a contingent of his Chassidim came and asked Rav Simchah Bunim, his senior talmid, to succeed him.

Under Rav Simchah Bunim, the Chassidus attracted many major talmidei chachamim; he himself gave a daily shiur in Gemara and Halachah to the leading lamdanim.

Rav Simchah Bunim was literally a Rebbe of Rebbes. Many of Poland’s major Rebbes were his talmidim. His top talmidim, zy”a, included Harav Menachem Mendel of Kotzk, Harav Yitzchak Meir of Ger (the Chiddushei Harim), Harav Yaakov Aryeh of Radzimin, Harav Chanoch Henoch of Aleksander and many more.

In his last years it became hard for Rav Simchah Bunim to read. His talmidim, therefore, read to him from sefarim. On one such occasion he dozed off. When he awoke he told them that he could not be a Rebbe anymore, as it took away too much time from his avodas Hashem. He said this a few times, and suddenly dozed off again. Upon awakening he said, “The Rebbes of the previous generations did not do this, rather they continued on as Rebbe, so I cannot do it either but must continue to be Rebbe.”

Before his petirah, his Rebbetzin was crying. “Why are you crying?” he asked her. “All my life I tried to learn how to ‘die,’ and now that it is finally coming, is this the time to cry?”

He was niftar on 12 Elul in Peshis’cha, and was buried there in the ohel of his Rebbe, the Yehudi Hakadosh. His son Harav Avraham Moshe, zy”a, was appointed Rebbe in Pershischa; the majority of the talmidim followed Harav Menachem Mendel of Kotzk, who was Rebbe in Tomashov first.

In 1944, during World War II, Romanian prime minister Ion Antonescue was dismissed. Soon after the country would abandon the Axis and join the Allies.