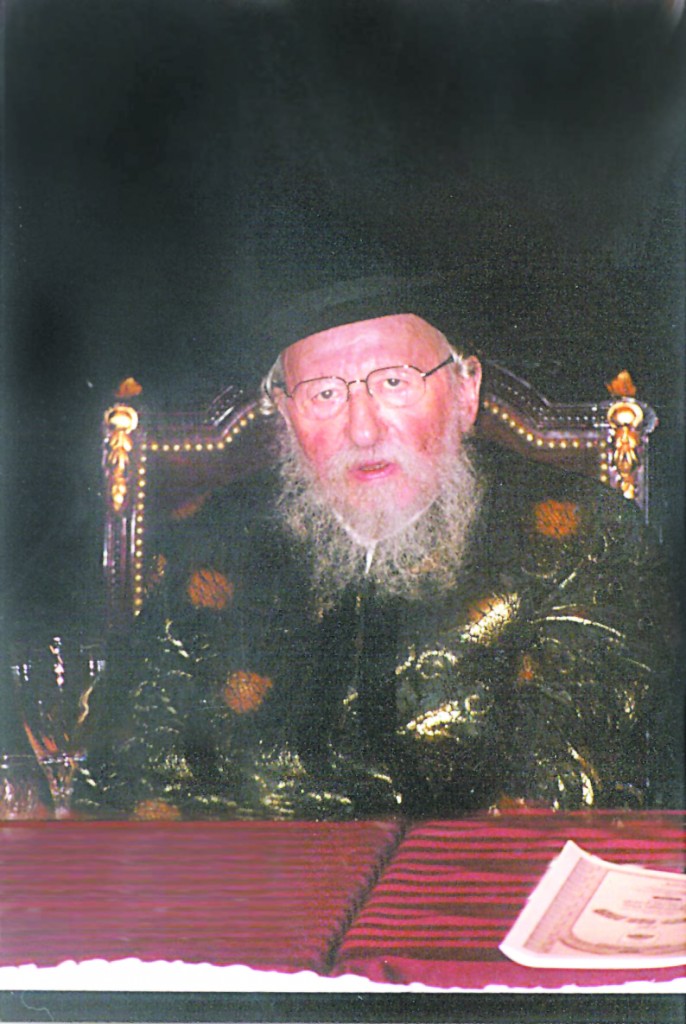 Today is a Yom Tov, as cited in Megillas Taanis.

The Roman Caesar Tureinus caught Lulianus and Pappus, two righteous brothers, in the city of Lod, and had them killed. The Gemara relates (Taanis 18) that when they were captured and brought before the Caesar, he exclaimed, “If you are from the same nation as Chananyah, Mishael and Azaryah, who were previously saved through a miracle, then a miracle is expected to occur for you too!” They responded, “We are not as righteous as they were, and you are not great enough for a miracle to happen through you. We will die because we deserve to be punished.” They were then killed al kiddush Hashem.

Immediately thereafter, the Caesar was killed by a legion of the Roman army and the rest of the Jewish communities were saved, which led to the declaration of this day as a Yom Tov. The Yom Tov was subsequently canceled because two other brothers, Shmayah and Achiyah, who were great men, were killed on this day.

Harav Naftali Tzvi Halberstam was born on 25 Sivan 5691/1931. His father was the Rebbe of Bobov, Harav Shlomo Halberstam, zy”a, and his mother was Rebbetzin Blima Rochel, Hy”d, the daughter of the Limanover Rav, Harav Chaim Yaakov Teitelbaum, zy”a. The Rebbes of Bobov were descended from the Sanz dynasty; on his mother’s side, Reb Naftali Tzvi was a grandson of Harav Eliezer of Dzikov, the son of Harav Naftali of Ropshitz, zy”a.

The Rebbe’s greatness could be discerned when he was still a very young child. He constantly sought to give nachas to his Creator and would daven with heartfelt simplicity in the way that he learned from his holy forebears.

The Rebbe’s paternal grandfather, Harav Bentzion Halberstam (the Kedushas Tzion), Hy”d, demanded of his chassidim that they serve Hashem in kedushah and taharah. Seeing these lofty traits in his grandson, he displayed special affection toward him. Reb Naftali Tzvi would often relate how he stood next to his grandfather during davening, absorbing from him the penimius of tefillah and Chassidus. It was remarkable that Reb Naftali Tzvi remembered so much about his grandfather, despite being very young at the time they were together.

Reb Naftali Tzvi was a young child when World War II broke out, and he spent the better part of the war together with his family, desperately trying to evade the Nazis who were particularly avid to capture and kill the manhigim of Klal Yisrael. Out of the whole family, only Harav  Shlomo, his brother, and his son, Harav Naftali Tzvi, miraculously survived the ravages of the Holocaust. The Rebbe would recount tearfully how one fateful Friday the Nazi soldiers came to take his grandfather, the Kedushas Tzion, Hy”d. Harav Naftali Tzvi was present, since he had been sent by his parents to bring food for Shabbos. The Nazis burst into the hiding place and literally ripped the tefillin off the head of the Kedushas Tzion. They took away all present except for the young Naftali Tzvi, who ran after them in the street.

The Rebbe became bar mitzvah on Shabbos Parashas Shelach 5704/1944, while they were hiding in the basement of the hospital in the Grosswardein ghetto. His father was always careful to immerse in a mikveh before donning tefillin, and it was especially important to him that his son do so before donning tefillin for the first time. Since any attempt to immerse involved mortal danger, they eventually found a way by pouring nine measures of water on themselves in the hospital. At the time, Harav Shlomo told his son to have kavanah that this “immersion” should be a preparation both for donning tefillin and for dying al kiddush Hashem.

Years later, when the Rebbe was asked to verify the story, he dismissed it by saying, “Yes, he once grabbed me and danced with me, though I have no idea even today what he wanted from me.”

In August 1944, near the end of the war, the Germans agreed to allow three boatloads of children along with some adults to leave Europe. Harav Shlomo sent Reb Naftali Tzvi to Bucharest to board one of these boats, which was bound for Eretz Yisrael. No sooner had the boats left Romania than the bloodthirsty Germans bombed one of them. Reb Naftali Tzvi later recounted standing on the deck and watching the helpless Jews from the other boat drowning, wishing he could save them but having no way to do so. Only six survived.

At war’s end Reb Naftali Tzvi, only 13, arrived in Eretz Yisrael. At this time, representatives from various relief organizations would settle the refugees, especially the very young ones who were alone, in nonreligious institutions and kibbutzim where they were forced to abandon Yiddishkeit. When they wanted to place Reb Naftali Tzvi, he staunchly stood his ground and refused, saying constantly, “Ich bin a Sanzer einikel, I am a grandson of the Sanzer dynasty.”

Eventually Reb Naftali Tzvi came to Yerushalayim, where he visited all the Gedolei Yisrael. At 14 he learned in the yeshivah of Slonim and became very attached to Harav Mottel Slonimer. He was also close to the Belzer Rebbe, Harav Aharon, and to the Chazon Ish.

He would also go to the Imrei Emes of Ger. Although the Imrei Emes was old and weak at the time, when Reb Naftali Tzvi passed by to wish him good Shabbos, the Imrei Emes stopped him and held his hand with chavivus. The Beis Yisrael once went to observe young Naftulche learning and revealed to the person accompanying him, “I came to see how a heilige bachur sits and learns.”

When the Satmar Rebbe, Harav Yoel Teitelbaum, came to Yerushalayim, he inquired where Reb Naftali Tzvi lived and where he learned. He took the trouble to find him, bringing him greetings from his father, Harav Shlomo, whom he had met just a few days before in Italy. (The two Rebbes had discussed pressing issues on the Jewish agenda, including the many agunos.)

Reb Naftali Tzvi would point to the four years he spent learning in Eretz Yisrael as the best years of his life. There he was able to learn undisturbed and build relationships with the Gedolei Yerushalayim, free as yet of the obligations that occupied him in his later years as he helped his father re-establish Bobov in America.

Determined not to allow the Nazis to emerge victorious, Harav Shlomo worked — single-handedly at first, and later with the help of Reb Naftali Tzvi — to re-establish the Chassidus and breathe new life into the broken she’eiris hapleitah, giving them strength and inspiration.

In 5708/1948, Harav Shlomo married Rebbetzin Frayda, the daughter of the Tomashover Rebbe, and eventually restored the Bobov dynasty to its former glory.

Harav Shlomo established a yeshivah alongside his beis medrash, in the Bobov tradition of chinuch habanim. The yeshivah opened with a handful of bachurim; Harav Shlomo devoted himself to their welfare as if he were their father. The talmidim, most of whom were homeless survivors without family, became attached to the Rebbe heart and soul. As the yeshivah grew, the financial burden and the debts incurred by it caused the Bobover Rebbe great distress. Arriving in America, Reb Naftali Tzvi, a yungerman of just 21 years, stepped in to help remove the great burden of debt and distress from his father’s shoulders.

Reb Naftali Tzvi married Rebbetzin Hessie, the daughter of Harav Yosef Paneth, the Dezher-Ileander Rebbe, zy”a. But even before that, Harav Naftali began filling an important role in the fledgling Bobover kehillah and mosdos, giving shiurim and tending to public and individual needs. He expended almost single-handed efforts towards the support of the burgeoning mosdos, accruing monumental personal debt.

For more than 50 years, the financial burden of the Bobover mosdos was carried by Reb Naftali Tzvi. He often expressed his satisfaction that he was able to assist his father and minimize his burden.

The move of the Rebbe’s court and yeshivah to Crown Heights, and later the establishment of the Bobover mosdos in Boro Park (in the mid-1960s) as well as in Eretz Yisrael and other places, were all accomplished with the resources that Reb Naftali Tzvi successfully amassed.

The Rebbe’s unparalleled humility kept him out of the public limelight until the petirah of his father on Rosh Chodesh Av 5760/2000, when he was declared Bobover Rebbe. Despite the Rebbe’s modesty, he was universally renowned for being a poel yeshuos and for his mesirus nefesh for every single Yid, literally sacrificing all his resources to help any Jew in need.

At the time that he assumed the leadership, he already suffered from a debilitating, progressive illness that caused him great pain and suffering and precluded him from being as accessible to the chassidim as he would have wished. Still, throughout this ordeal and the many difficulties that he went through in his life, no word of complaint ever passed his lips.

In his later years the Rebbe became extremely weak; after a trip to Eretz Yisrael in Adar 5764/2004 he collapsed. He was bedridden from then on. On 12 Adar II, 5765/2005, at the age of 73, the Rebbe was niftar. He was buried in Washington Cemetery, New Jersey, on the day of his petirah, according to his request in his tzavaah.

In 1951, during the Korean War, United Nations forces recaptured Seoul.

In 1962, Democrat Edward M. Kennedy officially launched in Boston his successful candidacy for the U.S. Senate seat from Massachusetts once held by his brother, President John F. Kennedy. (Edward Kennedy served in the Senate for nearly 47 years.)

In 1964, a jury in Dallas found Jack Ruby guilty of murdering Lee Harvey Oswald, the accused assassin of President John F. Kennedy, and sentenced him to death. (Both the conviction and death sentence were later overturned, but Ruby died before he could be retried.)

In 1967, the body of President John F. Kennedy was moved from a temporary grave to a permanent memorial site at Arlington National Cemetery.

In 1990, the Soviet Congress of People’s Deputies held a secret ballot that elected Mikhail S. Gorbachev to a new, powerful presidency.

In 1991, a British court overturned the convictions of the “Birmingham Six,” who had spent 16 years in prison for a 1974 Irish Republican Army bombing, and ordered them released.