In 5318/1558, Germany’s kaiser restricted certain rights that had previously been given to the Jews by the government. 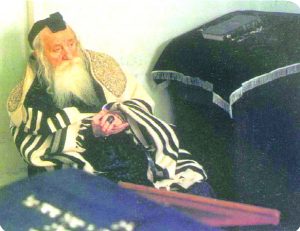 Harav Yehudah Horowitz was born on 18 Elul 5665/1905. His father was Harav Alter Yechezkel Eliyahu, zy”a, who was the son of Harav Yehoshua, zy”a, the Ateres Yehoshua of Dzikov. The mother of Rav Yide’le, as he was known, Rebbetzin Chava, was the daughter of the Ahavas Yisrael of Vizhnitz, zy”a.

Realizing his son’s great potential when he was still young, Rav Yide’le’s father sent him to Tarnow to learn under Harav Meir Arik, zt”l. Rav Yide’le remained there for five years, during which time he became extremely close to his rebbi. Rav Yide’le regarded those years as the most important of his life. Rav Meir bestowed on his talmid a ksav semichah, in which he wrote, “This bachur has no equal in the entire Galicia.”

In 5687/1927, he married his first cousin Rebbetzin Chana Miriam Sima, daughter of his uncle Harav Chaim Meir of Vizhnitz, zy”a, the Imrei Chaim.

He settled in Grosswardein, near his father-in-law who supported him, and steadily ascended in Torah.

He had a special affinity for the words of the Chasam Sofer. He secretly gave away his entire nadan to Harav Yosef Naftali Stern, so that he could print the Drashos Chasam Sofer.

After the petirah of the Ahavas Yisrael, Rav Yide’le was appointed Dayan in Klausenburg, where he resided for seven years until Adar 5704/1944, when Hungary was invaded by the Nazis. In order to evade the ghetto, Rav Yide’le volunteered to join a labor camp, where his job was to cut down trees in the forests.

Eventually, Rav Yide’le, together with his father-in-law, the Imrei Chaim, escaped from the camp. After countless nissim, they arrived safely in Romania.

Rav Yide’le went to Bucharest. There, the Bohusher Rebbe, zy”a, Harav Yitzchak Friedman, was instrumental in hiding and saving the lives of hundreds of people. Rav Yide’le received Romanian papers, which helped him.

After the war, Rav Yide’le obtained a visa to Eretz Yisrael, arriving there in Kislev 5706/1945.

After living in Tel Aviv for several years, he moved to Yerushalayim. He turned down the offer of Viznitzer Chassidim there to be their Rav and, instead, davened in the beis medrash of Harav Yosef Tzvi Dushinsky, zt”l.

In his later years, Rav Yide’le grew steadily weaker. In 5745/1985, he traveled to London for medical advice. Although he had intended his stay to be a short one, he remained there until his petirah. A few weeks after Pesach 5749/1989, he suffered a major stroke; and three weeks later, on 11 Sivan, his holy neshamah returned to its Maker.

Rav Yide’le was buried in the Enfield cemetery in London, where his kever is frequented and is known as a place of tefillah and yeshuos.

In 1787, the Constitutional Convention began at the Pennsylvania State House (Independence Hall) in Philadelphia, after enough delegates had shown up for a quorum.

In 1957, the third tube of the Lincoln Tunnel connecting New York and New Jersey was opened to traffic.

In 1961, President John F. Kennedy told Congress: “I believe that this nation should commit itself to achieving the goal, before this decade is out, of landing a man on the moon and returning him safely to the earth.”