This Day In History 11 Nisan/March 27 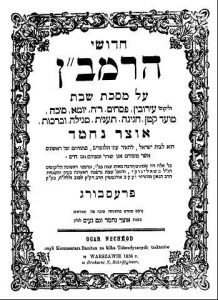 He is commonly known as the Ramban (Rabbeinu Moshe ben Nachman). He was the grandson of Rabbeinu Yitzchak ben Reuven of Barcelona, zt”l.

His Rebbe Muvhak was Rabbeinu Yehudah ben Yakkar, zt”l. He also learned under many of the Gedolim of his generation, including Rabbeinu Nassan ben Meir, zt”l, and Rabbeinu Yeshayah Habavli, zt”l.

The Ramban also studied medicine, which he practiced as a means of livelihood.

At the age of just sixteen, he began to write his sefarim. In Milchamos Hashem, he defended the Rif’s decisions against the criticisms of the Baal Hamaor, Rabbeinu Zerachiah Halevi, zt”l.

Many talmidim flocked to learn under the Ramban. Some of his famous talmidim include Rabbeinu Shlomo ben Aderes, the Rashba; Rabbeinu Yonah; Rabbeinu Aharon Halevi, the Ra’ah, zecher tzaddikim livrachah, and many others.

The Ramban was called upon to publicly defend the Torah because of the meshumad Pablo Christiani, who demanded that the king order the Ramban to take part in a public disputation. This was just another plot of his to try to make the Jews abandon their religion and convert.

The Ramban asked the king that complete freedom of speech should be granted. For four days he debated with Pablo Christiani in the presence of the king, the court and many churchmen.

The debate concluded in a complete victory for the Jews. The Ramban was dismissed by the king with a gift of 300 gold pieces as a mark of respect.

The Dominicans nevertheless claimed victory, so the Ramban felt it was incumbent on him to publish the debates. Pablo selected passages that he construed as blasphemies against Christianity. A formal complaint against the work and its author was lodged with the king.

The Ramban left Aragon and sojourned for close to three years somewhere in Castile or in southern France. In 5027/1267, he emigrated to Eretz Yisrael.

In Yerushalayim he established a shul in the Old City. Then, there were only two Jewish inhabitants of the city — two brothers. But by Rosh Hashanah, just three weeks later, they davened in Yerushalayim with a minyan.

His halachic works include Mishpetei Hacherem, the laws concerning excommunication; Hilchos Bedikah, on the examination of the lungs of slaughtered animals; and Toras Ha’adam, on the halachos of aveilus, including Shaar Hagemul.

He also wrote Igeres Hamussar, addressed to his son; and Igeres Hachemdah, a letter addressed to the French Rabbanim in defense of the Rambam.

In 1794, Congress approved “An Act to provide a Naval Armament” of six armed ships.