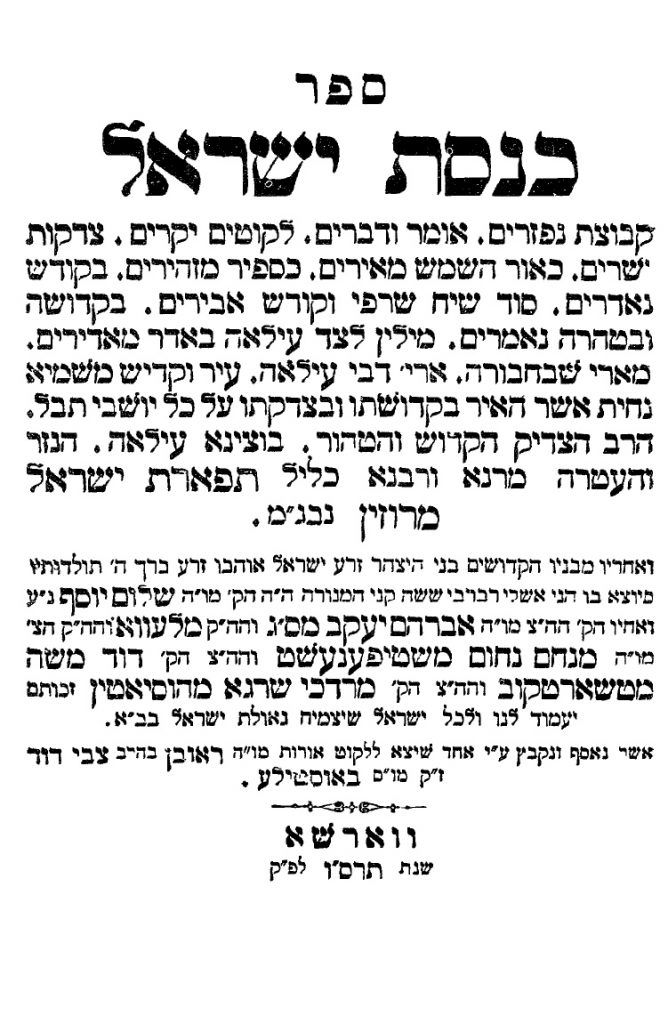 Harav Yisrael of Ruzhin was niftar in Potok on 3 Cheshvan 5611/1851, and his six sons, including Harav Avraham Yaakov, continued leading their father’s myriad Chassidim together. That year, on 11 Elul (today), the oldest son of the Ruzhiner, Harav Shalom Yosef, passed away.

Harav Avraham Yaakov was then called to lead a flock in Sadigura, where his father, Harav Yisrael, had previously resided. In Sadigura he established a beis medrash to which thousands flocked. Rav Avraham Yaakov exercised immense influence on all aspects of Jewish life throughout Russia, Galicia and Poland. The town of Sadigura became the unofficial capital of European Jewry, where hundreds of thousands turned for their every need.

Not long after he became Rebbe, Rav Avraham Yaakov was imprisoned by the Austrian authorities in the notorious dungeons of Chernovitz. When the Ruzhiner was niftar the Russians had been confident that they had seen the end of Beis Ruzhin. Thus, when they realized that the Ruzhiner’s successor was proving himself both competent and beloved, they were furious and ready to do anything to get rid of him. So when the opportunity presented itself they grabbed it with both hands.

A Jewish forger of Russian banknotes was apprehended by the police. In his possession they found a letter from the Rebbe blessing him in all his endeavors. Grasping this “golden opportunity,” the local maskilim got involved and testified that the Rebbe was the forger’s partner.

The Rebbe spent 15 excruciating months in a cell, some of them in solitary confinement, and was finally released with the help of many shtadlanim, among them Sir Moshe Montefiore.

After the Rebbe’s release he was ill for a while, but b’rachamei Shamayim he regained his strength and the Chassidus continued thriving under his stellar leadership.

During the last year of his life, 5643/1883, he often hinted that his petirah was drawing near. He became ill during Shabbos Nachamu, but remained clear-headed until the last night of his life, when he davened his last Maariv. He was niftar at midnight on 11 Elul.

Harav Avraham Yaakov’s divrei Torah are scattered in many places, among them Knesses Yisrael, Irin Kaddishin and others. They were collected and printed in Ner Yisrael.

In 1775, Britain’s King George III proclaimed the American colonies in a state of open rebellion.

In 1902, President Theodore Roosevelt became the first U.S. chief executive to ride in an automobile, in Hartford, Conn.