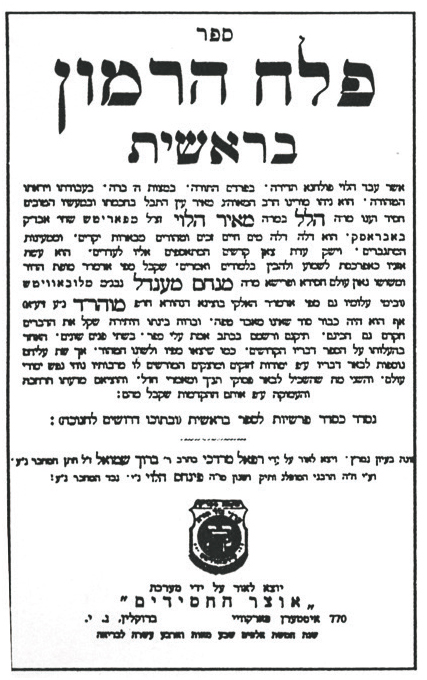 In 5493/1733, commemorating the defeat of the Persian army, the Jews of Baghdad established a Purim.

Harav Hillel of Paritch was born in 5555/1795. His father was Harav Meir Halevi.

In his childhood, Harav Hillel was known as the Iluy of Khometz, a small town in Russia. At 13, he was fluent in Shas and poskim, studied Kabbalah, and davened with the kavanos of the Arizal. At 15, he was versed in all of the writings of the Arizal.

Rav Hillel, as he was called, was a talmid muvhak of Harav Avraham Dov of Ovritch, zt”l, Rav of Zhitomir.

In 5571/1811, on the way home from a trip to Wohlin, the Baal HaTanya passed through the provinces of Little Russia. In every town and village where he stayed, people thronged to meet him. Fifty people gathered in the hotel of one of these towns, and it was there that the 16-year-old Rav Hillel heard the Baal HaTanya speak for the first time. Reb Zalman of Zezmir explained the Rebbe’s words to Rav Hillel and soon became his teacher in Chassidus, imbuing him with yirah and ahavas Hashem.

Rav Hillel first settled in Paritch. But when Harav Baruch Mordechai, zt”l, the Rav of nearby Bobroisk, moved to Eretz Yisrael, he moved to Bobroisk to assume his spiritual duties.

The Mitteler Rebbe made Rav Hillel a major mashpia and sent many young scholars to him for instruction and guidance in Chassidus. The Tzemach Tzedek, Harav Dov Ber’s successor, did likewise, and so for several generations Rav Hillel guided the youth of Chabad with mesirus nefesh.

On 11 Av 5624/1864, in Cherson, far from home, Harav Hillel of Paritch was niftar and buried there. An ohel was built over his grave, which became a popular place for people to daven.

Rav Hillel left behind a legacy of writings in Torah and Chassidus. Those published after his petirah were Imrei Noam (Vilna: 5636/1886), containing assorted drashos; Likutei Be’urim (Warsaw: 5628/1868), a commentary on various works of the Mitteler Rebbe; Maamarei Hishtatchus (Brooklyn: 5711/1951); and the various volumes of Pelach Harimon on Bereishis (Vilna: 5647/1887; Brooklyn: 5717/1957), on Shemos (Brooklyn: 5715/1955), and on Shir Hashirim (Potava: 5678/1918). Other pamphlets and unpublished maamarei Chassidus are in the archives collected by the sixth Lubavitcher Rebbe, Harav Yosef Yitzchak Schneerson, zt”l.

In 1962, one day after launching Andrian Nikolayev into orbit, the Soviet Union also sent up cosmonaut Pavel Popovich; both men landed safely on Aug. 15.

In 1981, IBM introduced its first personal computer, the model 5150, at a press conference in New York.

In 1992, after 14 months of negotiations, the United States, Mexico and Canada announced in Washington that they had concluded the North American Free Trade Agreement.