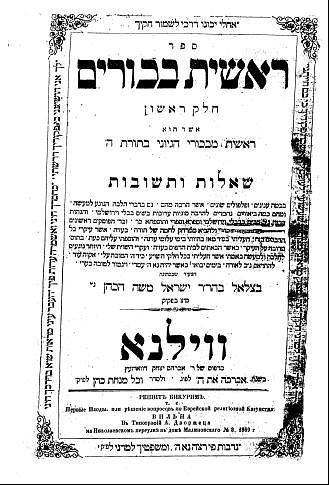 In 2449/1312 B.C.E., Bnei Yisrael took sheep (which the Egyptians worshiped), and tied them to their beds in preparation for the korban Pesach. Miraculously, the Egyptians didn’t harm them. Shabbos Hagadol commemorates this event, since on that particular year the 10th of Nisan was on Shabbos. (See the commentaries of Shulchan Aruch, Hilchos Pesach, as to why the miracle is commemorated on Shabbos and not on the date the miracle occurred.)

2489/1272 B.C.E., Miriam Haneviah, a”h, at the age of 126. At her petirah, the well from which Bnei Yisrael drank in the Midbar dried up, but it was restored in the zechus of Moshe and Aharon. This well is located today in the Kineret (Shabbos 35).

Harav Betzalel Hakohen was born on 27 Teves 5580/1820 in Vilna. His father, Harav Yisrael Moshe, taught him Chumash and Rashi, and later Gemara. By age 11, he was fluent in two sedarim of Shas. This earned him the title iluy, genius.

Due to his fame, he was taken as a chassan by Harav Aharon Rosenthal from Vilna, for his daughter Batyah Hadassah. He put down a huge dowry for a chassan of such stature. The wedding was held shortly after Rav Betzalel became bar mitzvah, and on the same day, he made a siyum on the entire Shas, giving the Hadran at the seudah, in front of all of Vilna’s Gedolim.

At 18, Rav Betzalel was fluent in Shas Bavli, Rif, Rambam, Shulchan Aruch and Poskim. That year, Harav Yaakov of Karlin honored him with a copy of his Mishkenos Yaakov. Harav Wolf Halevi of Zittel asked Rav Betzalel to review his Emek Halachah before it went to print.

When Rav Betzalel was 20, he delivered a drashah in the main beis medrash on the first day of Shavuos, which gained him much acclaim.

That same year, his wife passed away, leaving no children. His zivug sheini was Rachel, the daughter of Harav Yitzchak Zverintzer.

In 5690/1830, Rav Betzalel was appointed Rav in Vilna. From then on, every Rav and Gadol who traveled through Vilna stopped at his home to discuss Torah and halachah with him.

In 5612/1852, he suffered the petirah of his second wife, who left him with one son. He then married the daughter of Reb Tzvi Hirsh Bairain.

He immersed himself in writing his chiddushim and answering halachic she’eilos.

Rav Betzalel wrote Reishis Bikurim, a collection of his she’eilos t’teshuvos. He is probably most famous for his Mareh Kohen, chiddushim on the Shas, which were printed in the back of every standard edition of Shas.

In 1775, Paul Revere began his famous ride from Charlestown to Lexington, Massachusetts, warning American colonists that the British were coming.

In 1934, the first laundromat was opened by John F. Cantrell in Fort Worth, Texas; the “Washateria,” as it was called, rented four electric washing machines to the public on an hourly basis.

In 1942, the first World War II edition of The Stars and Stripes was published as a weekly newspaper.

In 1946, the League of Nations met for the last time. The International Court of Justice, the judicial arm of the United Nations, held its first sitting in The Hague, Netherlands.

In 1978, the Senate approved the Panama Canal Treaty, providing for the complete turnover of control of the waterway to Panama on the last day of 1999.