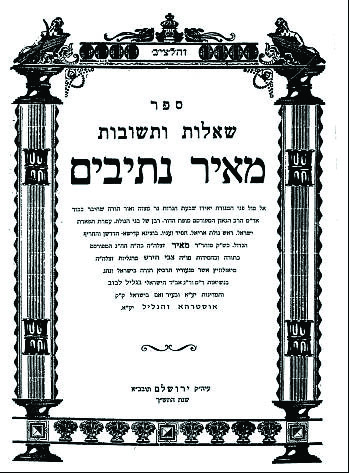 At five, the child began to learn Gemara, besides his regular shiur in Chumash, a novelty even in those times.

Rav Meir learned under his father, Rav Tzvi Hirsch, together with his older brother Harav Yitzchak Dov Ber, who was seventeen to his eleven years. At that time the Baal Shem Tov hadn’t revealed himself yet; he served as a shochet in nearby Kashilowitz. The two brothers felt an urge to go to this shochet. Secretly they left town, without informing even their father.

After a few days, local Yidden set out on a search for them, and found them together with the shochet. When their father asked what they witnessed, all they could say was that they felt this man was the wisest person and the greatest tzaddik in the world.

After his wedding, Rav Meir lived in Horodenka, where he served as Rav. From there, Rav Meir traveled to the famous kloiz in Brody, where he joined this group of talmidei chachamim and mekubalim.

Afterwards, Rav Meir settled in Yazlowitz, where his father lived. Following the latter’s petirah, Rav Meir was appointed Rav there. He was 28.

Later Rav Meir was Rav of Lvov (Lemberg), and in 5537/1777, he became Rav of Ostroha, in the place of Harav Meshulam Zalman Ashkenazi, zt”l, the son of the Chacham Tzvi, zt”l. He held this position until his petirah.

Rav Meir was known as one of the leaders of the generation. Many halachic she’eilos were addressed to him, and his sefer She’eilos Uteshuvos Meir Nesivim was well received. His koach hapsak was clear cut, and he helped release agunos to remarry. He enacted a takanah that a shochet must retire at the age of 70.

His sefarim include Meir Nesivim on the Torah; Sod Yachin Uboaz, a mussar letter to his children; Haderech Hayashar V’hatov, compiling the sources of many halachos in Shulchan Aruch; and Kosnos Or, a list of all 613 mitzvos.

For thirteen years Rav Meir led and inspired the Ostroha kehillah. He was niftar on Shabbos, 10 Iyar, 5550/1790, and was buried in Ostroha near the kever of the Maharsha.

In 1507, a world map produced by German cartographer Martin Waldseemüller contained the first recorded use of the term “America,” in honor of Italian navigator Amerigo Vespucci.

In 1945, during World War II, U.S. and Soviet forces linked up on the Elbe River, a meeting that dramatized the collapse of Nazi Germany’s defenses. Delegates from some 50 countries gathered in San Francisco to organize the United Nations.

In 1959, the St. Lawrence Seaway opened to shipping.