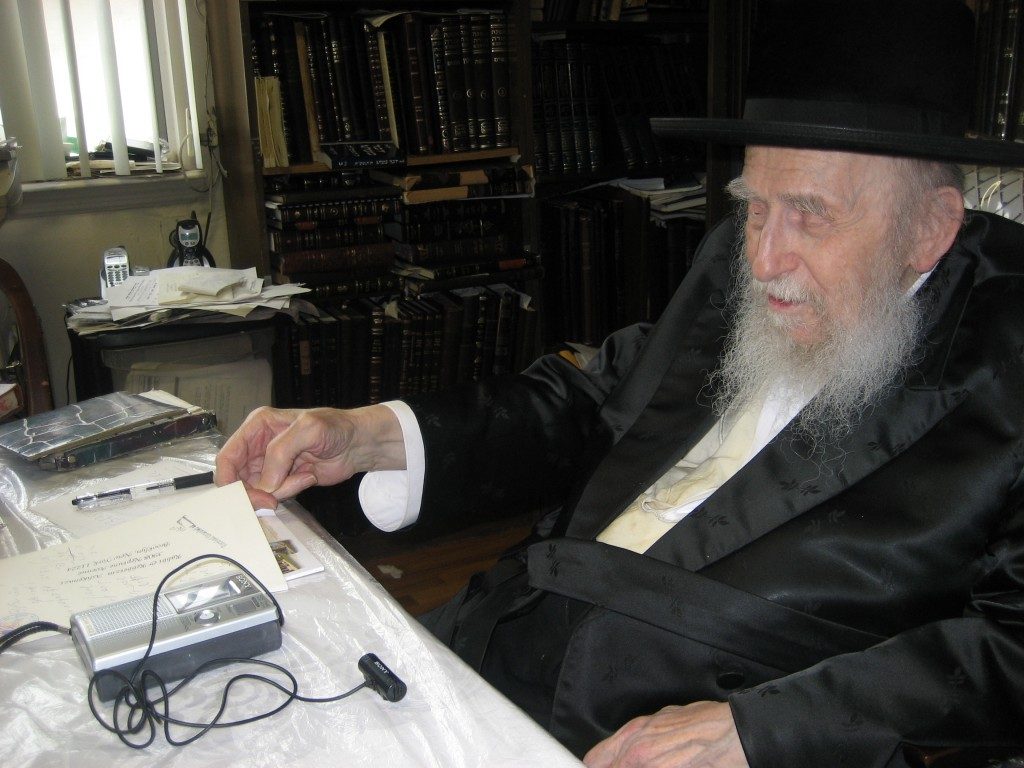 In 1656/2105 B.C.E., according to Rabi Eliezer, Noach opened the window of the teivah and dispatched a raven to determine if the floodwaters had begun to recede.

Harav Elimelech Ashkenazi was born in Budapest, Hungary. His father was Harav Alexander Chaim Ashkenazi, Nasi of Yeshivas Ohr Torah in Stanislav and later one of the founders of the Satmar mosdos in Yerushalayim.

According to family members, he was born on Erev Rosh Chodesh Nisan 5677/1917, and was thus 95 at his petirah. Some sources indicate that he may have been older.

He spent his childhood years in Stanislav, basking in the presence of his paternal grandfather, Harav Itzikel of Alesk, zy”a. Harav Chaim Hager, the Antiniye Rebbe, whose court was also located in Stanislav, would farher Elimelech, and derive much enjoyment from listening to the young talmid chacham.

At the age of 15 he joined the famed Yeshivas Chachmei Lublin, studying under Harav Meir Shapiro, zt”l, and learned together with Harav Shmuel Wosner, zt”l, of Bnei Brak. The Rav, who was a powerful and eloquent speaker, would mention his rebbi, Harav Meir Shapiro, in nearly every public address he gave. At the yeshivah, Reb Elimelech forged an exceptionally close relationship with the famed mekubal Harav Shimon Zelichover, Hy”d.

He later learned in Ungvar, at the yeshivah led by Harav Avraham Yosef Greenwald, zt”l, the son of the Arugas Habosem.

The Rav, being a descendant of the Sar Shalom, the first Rebbe of Belz, had a close connection with the Belzer Rebbes. He was also very close to the Satmar Rebbe, Harav Yoel Teitelbaum, zy”a.

In 5700/1940, Reb Elimelech emigrated to Eretz Yisrael, and shortly thereafter he married the daughter of Harav Zalman Weber, zt”l, Rav of Frankfurt.

In Eretz Yisrael, he gave regular shiurim in the Satmar and Belzer batei medrash.

In 5717/1957 the Tchebiner Rav, zt”l, instructed Reb Elimelech to accept a position in rabbanus, and he subsequently became Rav in Sao Paulo, Brazil. After selflessly serving this kehillah with great devotion for 12 years, he accepted an offer to become Rav of Adass Yisrael in Melbourne, Australia.

Upon leaving Brazil, his son-in-law, Harav Meir Avraham Illowitz, succeeded him as Rav of Sao Paulo.

Reb Elimelech served as Rav in Melbourne for 18 years, leaving a powerful and enduring impact. In 5747/1987 he moved to Seagate in Brooklyn, where he served as Rav of Khal Chavas Daas.

He was niftar on 10 Elul 5772/2012 at the age of 95, and his mittah was flown to Eretz Yisrael, where he was buried on Har Hazeisim in Yerushalayim.

In 1515, during the Italian Wars, the two-day Battle of Marignano began as forces led by Francis I of France clashed with troops from the Old Swiss Confederacy. The French succeeded in forcing the Swiss to abandon nearby Milan.

In 1788, the Congress of the Confederation authorized the first national election, and declared New York City the temporary national capital.

In 1789, the United States Government took out its first loan.

In 1977, the first diesel automobiles were introduced by General Motors.