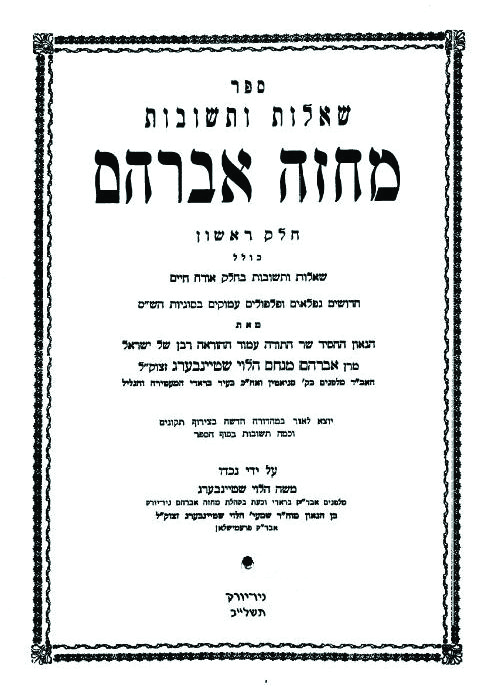 According to Rabi Yehudah (Bava Metzia 106:2), today is the start of summer.

In 2449, six weeks after their exodus from Egypt, Bnei Yisrael arrived at Har Sinai and camped at the foot of the mountain “k’ish echad b’lev echad, as one man, with one heart,” in preparation for receiving the Torah from Hashem. On this day, however, Moshe did not give them any mitzvos because of their exhaustion from the journey.

In 4856/1096, Crusaders massacred the remainder of the Jews of Worms as they were reciting Hallel, as related in the kinah “Mi yitein roshi mayim.”

In 3440, Yechezkel Hanavi recounted the prophecy delivered to him regarding the arrogance of Mitzrayim. (See Yechezkel 31)

Harav Avraham Menachem Mendel Steinberg was born in 5607/1847 in Seret, Bukovina. His father was Rav Meir.

In 5667/1907 he was appointed Rav of Brody, a city full of talmidei chachamim. He was noted for his clarity in psak halachah, and his name was revered across the Jewish world.

With the outbreak of World War I in 5674/1914, Rav Avraham Mendel moved to Vienna, Austria, which, at the time, hosted many Rebbes and Rabbanim who had fled there from across Europe. Rav Avraham Mendel forged a close connection with many of them.

After the war Rav Avraham Mendel returned to his kehillah in Brody. He began to work on the publication of his teshuvos; the first volume, on Orach Chaim, was published in 5687/1927.

He planned to print thousands more of his teshuvos; he had made it halachically possible for more than 4,000 agunos — due to the war — to remarry, and he had much material fit for publication. But alas, he was niftar just one year after the first volume came out.

Rav Avraham Mendel was niftar on Rosh Chodesh Sivan 5688/1928 at the age of 82. His rich legacy was perpetuated by his sons, who served as Rabbanim in various kehillos.

Although Rav Avraham Mendel left close to 30 manuscripts on all facets of Torah ready for publication, most of them were tragically lost or destroyed during World War II, and were never printed. Three were salvaged and later published by his grandson, Harav Moshe Steinberg, zt”l.

In 1776, Virginia authorized its delegation to the Continental Congress to support independence from Britain.

In 1862, President Abraham Lincoln signed an act establishing the Department of Agriculture.

In 1988, the Soviet Union began the process of withdrawing its troops from Afghanistan, more than eight years after Soviet forces entered the country.