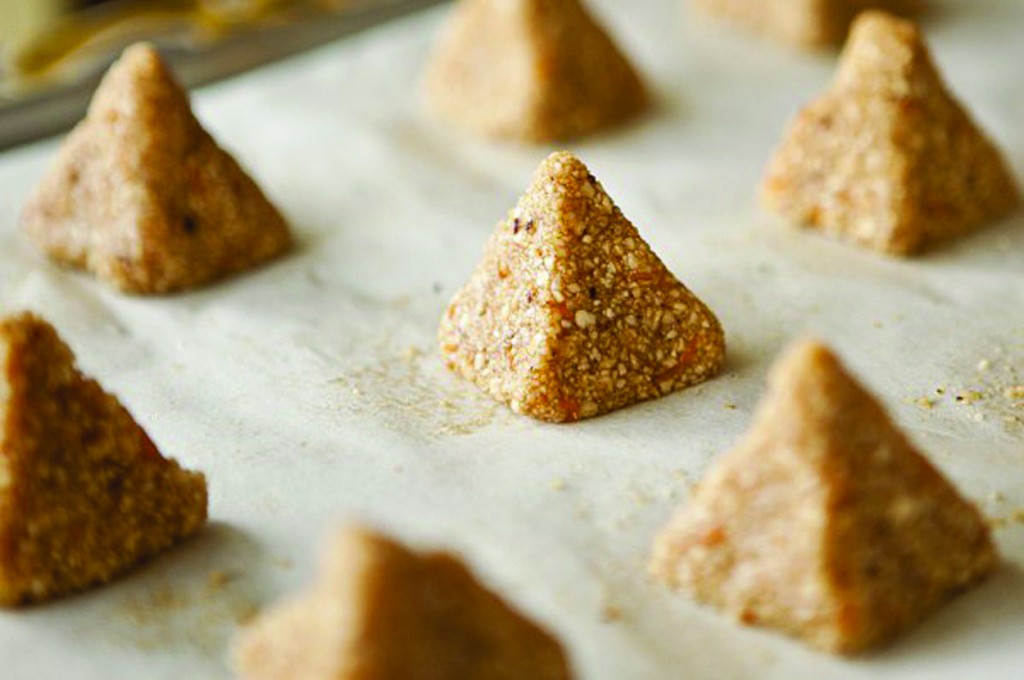 While our first thoughts of Sephardic food may bring to mind Syrian or Moroccan dishes, Sephardim all originate from Sepharad, or Spain! It was during the 1400s and the Spanish Inquisition that Sephardic Jews emigrated from Spain to the Middle East and Northern Africa. As they moved on to more tolerant countries, they brought along Spanish culinary traditions which they combined with local cuisines. But some dishes have remained truly Spanish.

Hamin (or chamin) refers to a hot dish cooked overnight and served on Shabbos. History tells us that the food was placed in a clay pot and buried in the ground under red-hot ashes and left to cook in that manner overnight. Nowadays you can make it in a slow cooker or Crock-pot.

It usually includes stuffed vegetables in addition to meat or chicken and chickpeas. Sephardim also add spices such as cumin and hot peppers. The ingredients and spiciness of hamin varies from area to area. Jews from Spain make a version called adafina, which calls for spices like garlic, cinnamon, allspice, ginger and pepper, as well as whole eggs that turn brown and creamy during the long cooking process. The brown eggs, called haminados, are shelled before serving and placed on top of the other cooked ingredients.

2½ pounds of beef flanken or ribs and beef bones

4 eggs, raw in their shells

Dice and sauté the onion until it is golden. Cut the beef into chunks and brown together with the onions. After the beef is browned, add chickpeas and beans, potatoes and sweet potatoes. Add the spices as directed or to taste. Place this mixture in a cooking bag in your slow cooker.

In a separate bowl mix together the rice, sweet potato and diced onion. Add oil and two cups of water. Place rice mixture into a separate cooking bag and place in the slow cooker. Cover bags with water. Add eggs in their shells. Cook everything together on low heat for 12 hours.

Open the bags into separate bowls and serve each separately with the eggs on top. 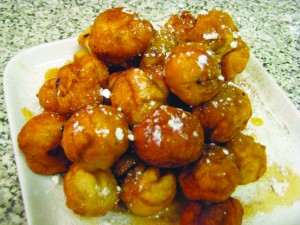 You don’t have to wait for Chanukah to try this tasty treat!

Juice of 1 large orange, strained of pulp (about ? cup), divided

Combine flour, 1 tablespoon sugar and salt in a large bowl. Set aside. Pour ½ cup water into a large bowl. Sprinkle sugar and yeast over water and wait until mixture become foamy, about 10 minutes. Add flour mixture, remaining water, 3 tablespoons orange juice, orange zest, and 2 tablespoons oil to yeast mixture and stir with a wooden spoon to combine, about 30 seconds.

Using your hands, knead dough in bowl until smooth, adding 1 tablespoon of additional flour at a time to reduce stickiness, for about 1–2 minutes. Remove dough and place in a clean, lightly oiled bowl. Cover with a clean kitchen towel and let rest until dough has doubled in volume, about 1 to 1½ hours.

Heat oil in a large stockpot to about 350–360° on a deep-fry thermometer. Lightly oil hands, form dough into walnut-sized balls, and drop into oil in batches. Fry until golden brown on both sides, about 3–4 minutes total. Remove with a slotted spoon and drain on paper towels.

Place honey and remaining orange juice in a small saucepan and simmer 3–4 minutes until warm. Drizzle honey over bimuelos and serve. 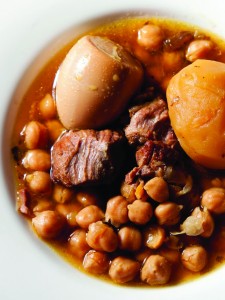 A popular Spanish nut cookie that is delicious Pesach as well as all year!

Mix all the ingredients with a fork until they hold together in a dense paste. Cover the paste in a bowl and chill it for 20 minutes in the refrigerator.

Line cookie sheets with baking parchment or Silpats. Moisten your hands lightly with cold water; divide the paste into 30 balls and compact them well by rolling them between your palms. Space the balls one inch apart on the cookie sheets.

Press each ball into a pyramid. Form the base first: using your thumb and first two fingers, push straight down on the ball to flatten the bottom against the cookie sheet. Turn the cookie on its side and this time press down at an angle, to form the first triangular side. Rotate 90° and repeat, making sure the second side is equal in size to the first. Repeat on the remaining two sides, for a total of four triangular sides plus the square bottom.

Bake for 20 minutes. Mustachudos should be lightly toasted, at most. Don’t let them brown (they’ll dry out and crack), and don’t worry if they come out of the oven looking a little pale. Transfer to a plate or wire rack to cool.

If you prefer to prepare these nutty cookies with less effort, simply press the batter into a parchment-lined cookie sheet and bake 10 minutes. Remove from oven and cut in squares. Cool and serve.