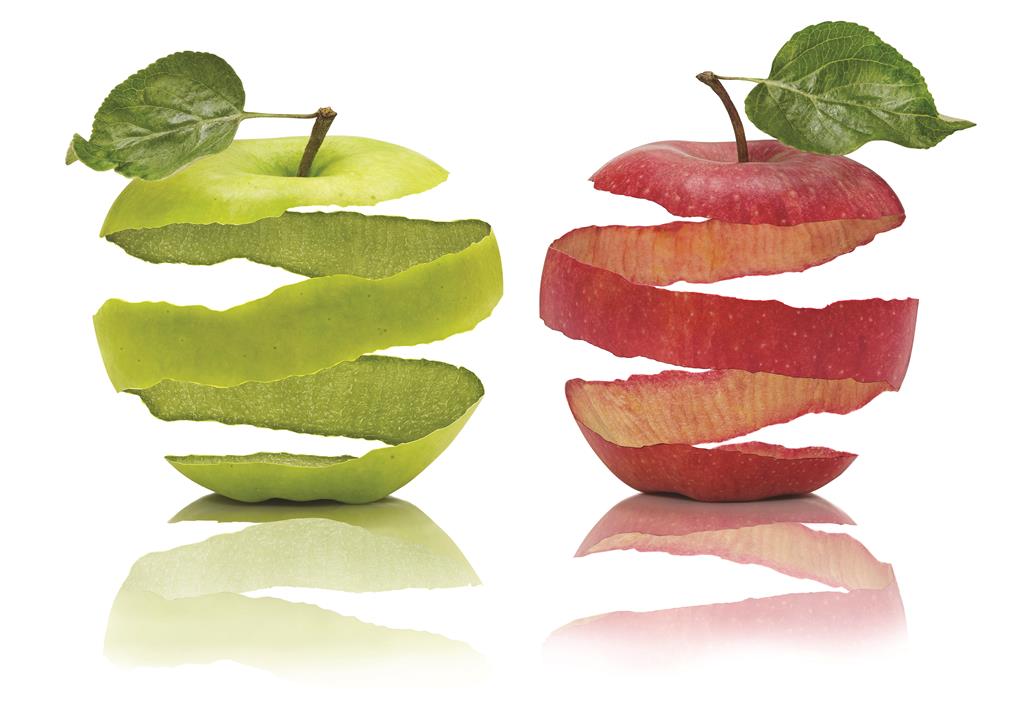 Q. Can you help resolve an ongoing discussion among my friends and family about non-organic apples? Is it healthier to eat the peel for its health benefits or to discard the peel to get rid of any toxins? At home I buy organic apples, but when I travel I can’t always find them.

A. Your question focuses squarely on the debate about buying conventional or organic fruits and vegetables. Before digging in, let’s cover a couple of basic points:

• Conflict remains about whether organically grown produce is nutritionally superior to conventional. The U.S. Agriculture Department, which oversees the U.S. National Organic Program, states, “Organic is a labeling term that indicates that the food or other agricultural product has been produced through approved methods that integrate cultural, biological and mechanical practices that foster cycling of resources, promote ecological balance, and conserve biodiversity.” The certified-organic label is not an indicator of nutritional superiority.

• Apples and other fruits, whether organic or conventional, are inherently nutritious, disease-fighting foods. According to the 2010 Dietary Guidelines for Americans, there’s moderate evidence to show that eating at least 2 1/2 cups each of vegetables and fruits per day is associated with reduced risk of cardiovascular disease and certain cancers. But take note: Our current fruit intake is abysmal. Statistics from a 2013 Centers for Disease Control and Prevention survey show nearly 40 percent of Americans eat fruit less than one time a day. So a round of applause to you for eating apples regularly and seeking them out during your travels!

To your specific question: By peeling apples you miss out on powerful nutritional pluses. According to the USDA National Nutrient Database, one medium (three-inch-diameter) unpeeled apple has nearly double the fiber, 25 percent more potassium and 40 more vitamin A — just to choose a few important nutrients.

“Animal studies show that ursolic acid may have an effect on burning more calories, weight loss and improved glucose control,” Trujillo says. She suggests skipping the seeds, though; they can be toxic.

Choosing organic produce, such as apples, may help reduce your exposure to pesticide residues. A 2010 report from the U.S. Department of Health and Human Services, “Reducing Environmental Cancer Risk: What We Can Do Now,” recommends that “individuals reduce their environmental cancer risk by choosing, to the extent possible, food grown without pesticides or chemical fertilizers.” Regarding conventional foods, the report recommends “washing conventionally grown produce to remove residues.”

Although apples top the Environmental Working Group’s 2014 Dirty Dozen list identifying the most pesticide-laden produce, this shouldn’t be viewed in isolation. Consider this list in light of a 2012 report from the USDA Pesticide Data Program, which summarizes, “Overall pesticide chemical residues found on the foods tested are at levels below the tolerances established by the Environmental Protection Agency (EPA) and do not pose a safety concern.”

Some people choose to purchase certified-organic foods to assure themselves that their food has gone through a systematic process aligned with organic certification and offers certain environmental benefits, such as avoiding genetically modified organisms (GMOs) and synthetic pesticides.

Other reasons? “One is to support farmers who make the choice to abide by regulations to produce foods using environmentally sound methods that improve biodiversity and protect soils,” says Ashley Colpaart, a registered dietitian and coordinator of the Northern Colorado Food Cluster, which works to build resilient local food systems.

One more factoid to chew on: According to the USDA’s Economic Research Service, in 2007 nearly a quarter of apples organically grown in the United States were sold as conventional. “If you ask farmers about their production process, they may say they use organic production methods but aren’t certified,” Colpaart says. “Whether a farmer chooses to become certified includes many considerations: cost, regulatory oversight and recordkeeping, to name a few. The farmer’s philosophy matters, too. It includes whether they believe their on-farm management actually goes beyond the organic regulations set by the National Organic Board.”

If you can afford organic, that’s the way to go to limit pesticides, Trujillo says. But don’t avoid fruit if you can’t find organic. “The benefit of getting your fill of fruits each day outweighs the risks of minimal pesticide exposure.”

When it comes to handling and preparing produce for safe eating, Trujillo echoed guidance from the HHS and FDA:

• Cut away damaged or bruised areas.

• Wash all produce (conventional or organic) thoroughly under running water before eating, cutting or cooking.

• Soap, detergent or commercial produce washes are not recommended.

• Scrub firm produce, such as apples, potatoes or squash, with a clean produce brush.

• Dry all produce with a clean cloth or paper towel.

Hope Warshaw, a registered dietitian and certified diabetes educator, is the author of numerous books published by the American Diabetes Association.