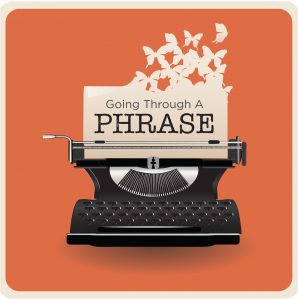 Like most mysteries, it started out peacefully enough. I was telling my son Meilech about someone who adopted all the customs of a certain group. And I offhandedly added, “The whole nine yards.”

Meilech asked, “Where does ‘whole nine yards’ come from?”

I said, “Isn’t it a football expression?”

What do I know about football? Just that it’s not a job for a Jewish boy. Also that buffaloes don’t have wings. (Buffalo wings are non-bison. The spicy recipe for chicken wings popular with football fans originated in 1964, at the Anchor Bar in Buffalo, New York.)

So I did what I always do. I looked it up.

Guess what. (No question mark after “guess what,” thank you.) Nobody knows where “the whole nine yards” comes from.

(Relax. It’s OK to end a sentence with a preposition. The preposition prohibition is a “misguided rule.” — Theodore Bernstein, Miss Thistlebottom’s Hobgoblins: The Careful Writer’s Guide to the Taboos, Bugbears, and Outmoded Rules of English Usage.)

Nine yards is one of the words’ (not world’s) great unsolved mysteries. I thought of calling in Scotland Yard. But that was a blind alley. As the Smithsonian observed, “Scotland Yard has an easily muddled history, full of misnomers and controversy. Neither in Scotland, nor in a yard, it is the name of the headquarters of London’s Metropolitan Police. … The Yard doesn’t serve the city either, but instead the Greater London area.”

So it was back to the books. Here’s the Oxford English Dictionary (OED) definition: “colloq. (orig. and chiefly U.S.). the whole (also the full, the entire, all) nine yards: everything, the whole lot; (also as adv.) all the way. …”

The OED’s earliest citation is an 1855 newspaper anecdote, “The Judge’s Big Shirt,” … where someone foolishly took material for three shirts and made one big shirt out of the whole nine yards.

But that seems to be made out of whole cloth. A pure fabrication.

William Safire wrote some nine columns dealing with nine yards, but reached no conclusion. Neither did his cabinet of mavens:

‘‘‘Stumps me completely,’’ reports Stuart Flexner, boss of Random House’s reference department. ‘I’m sorry to report that I’ve come up with exactly zilch,’ adds Sol Steinmetz … These guys are the heavy hitters of slang etymology; if they don’t know, only one other source is left: Dr. Fred Cassidy, director-editor of the … Dictionary of American Regional English, known to the lexicographic world as ‘the man from DARE.’

“‘I am also thoroughly puzzled about it,’ replied Professor Cassidy, offering two leads churned up in his thousands of interviews: the contents of an army truck, and something to do with a bolt of cloth.”

Ben Zimmer, language columnist at the Wall St. Journal (one of his full nine yards of titles), has been tracking the case. In 2009, he reported, “Here are just a handful of the conjectures for the origin of the whole nine yards:

amount of cloth needed for a Scottish kilt, burial shroud, or three-piece suit

yardage in American football (ten yards needed for a first down)

other types of “yards”: properties on a city block, naval shipyards, yardarms on a sailing ship, etc.”

In 2013, The New York Times reported new discoveries in the case, quoting Zimmer, as well as Fred R. Shapiro, editor of the Yale Book of Quotations, and Bonnie Taylor-Blake, a neuroscience researcher at the University of North Carolina.

I asked Zimmer if there have been any updates since then. He directed me to The American Dialect Society Mailing List, where Shapiro quoted a report of a letter from 1850 in the Bowling Green (Missouri) Democratic Banner. One local official vilified another: “Your last ‘nine yards’ would be unworthy of notice, as it commences with a falsehood and ends with a lie.”

Shapiro noted that we still don’t have a definite origin for nine yards, but he theorized that it signifies “something very long.”

Since nobody knows, I hereby invoke poetic license and create my own origin theory. You heard it here first.

It all begins with the Bible and the Talmud. (Doesn’t everything?) The first Mishnah in Tractate Shabbos says that, by Biblical law, it is forbidden to carry an object from a private domain into a public domain. Without getting into the complexity of the laws, an eruv (blend or mixture) is a mechanism by which we combine separate courtyards or domains into one domain.

Stay with me now. We’re almost there …

So, one day, Yossi comes home and tells his wife, “Guess what. We can wheel the baby carriage this Shabbos. The Rabbi connected all nine courtyards in the area with an eruv.”

“All the way to my sister’s house?”

And now you know the whole Megillah.