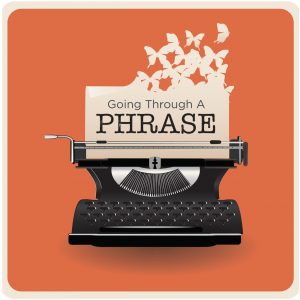 I got a call from a friend I hadn’t heard from in a few years. After the hellos, he said, “We get Hamodia. So I see you’ve been writing.”

Then there was a pause. It was only a second or two, but the silence was palpable. Finally, he said, “It’s pretty highbrow stuff.”

I was tempted to say, “If you think my brow is high, you should see what happened to my hairline. It went clear up to the top and down the other side.”

But I knew what he meant. He was tactfully suggesting that I might be writing over people’s heads. Oxford English Dictionary (OED) defines highbrow: “Of the nature of or characterized by high culture; rarefied; intellectually demanding.”

I conceded that at first I worried about the same thing. But writing a column on language, I had to give it its head — keep a loose rein and let it gallop where it wanted to. I just let the column find its own audience. Thank G-d, the column and readers seem to have found each other.

The truth is, even when you write for children, it can be a mistake to talk down. As E.B. White said, “You have to write up, not down. Children are demanding. They are the most attentive, curious, eager, observant, sensitive, quick, and generally congenial readers on earth. They accept, almost without question, anything you present them with, as long as it is presented honestly, fearlessly, and clearly.”

Later, I wondered — how did highbrow come to mean high culture? What does brow line have to do with intellect?

It was a pretty bumpy IQ test. Cranioscopy was later renamed ­phrenology — “‘mental science,’ from phreno– + -logy ‘study of’” (Online Etymological Dictionary). It really caught on in the 1830s in New York, where two brothers, Lorenzo Niles and Orson Squire Fowler (not to be confused with language legends H.W. and Frank Fowler), turned it into an industry.

Erika Janik wrote in The Atlantic, “The eldest brother, Orson Squire Fowler, hadn’t set out to be a phrenologist. The son of a farmer and church deacon from upstate New York, Orson first pursued the ministry but found his true calling in phrenology. He began to lecture on the topic to his classmates at Amherst College in Massachusetts and offered head readings for two cents each.”

Soon, brother Lorenzo wanted to get in his 2¢. And the business was off and running.

Later experts dismissed phrenology as skulduggery. But the pseudoscience left us with a lingering headache.

It also gave us a new taxonomy of taste. (Relax. Taxonomy has nothing to do with the IRS. It means scientific classification.) The imagery naturally lent itself to the culture war between the upper and the lower class and — horrors — the middle class.

In 1932, author Virginia Woolf wrote a letter to the editor of The New Statesman. She was mortally offended that the book reviewer neglected to call her “highbrow.” She patronizingly gushed how much she loved the charming “low brows” and their quaint verbal expression. But she added, “I ask nothing better than that all reviewers, forever, and everywhere, should call me a highbrow. I will do my best to oblige them. … If any human being, man, woman, dog, cat or half-crushed worm dares call me ‘middlebrow’ I will take my pen and stab him, dead.’” (Today, just to be PC, she would likely say “stab him or her dead.”)

A middlebrow is defined as “only moderately intellectual; of average or limited cultural interests (sometimes with the implication of pretensions to more than this). Of an artistic work, etc.: of limited intellectual or cultural value; demanding or involving only a moderate degree of intellectual application, typically as a result of not deviating from ­convention” (OED).

The despised “middlebrow” is the diluted culture that purees highbrow culture and markets it in accessible, palatable portions. It’s sweetened Cabernet Sauvignon to appeal to non-drinkers. It’s the literature of Book of the Month Club.

There is a genuine wisdom of facial characteristics. But I don’t dabble in Kabbalah, so I won’t attempt to compare phrenology to Chochmas Hapartzuf (Wisdom of the Visage).

But one thing I do know: an interpretation from the ­Kotzker Rebbe, zy”a, on the verse “in their wrath they killed a man” ­(Bereishis 49:6). The Hebrew apam is translated as “their wrath.” Apam literally means “their noses,” in this sense, the flaring nostrils of rage.

The Kotzker said that sometimes you don’t need to say a word to destroy someone. A sneer is enough. “You can kill with a nose.”