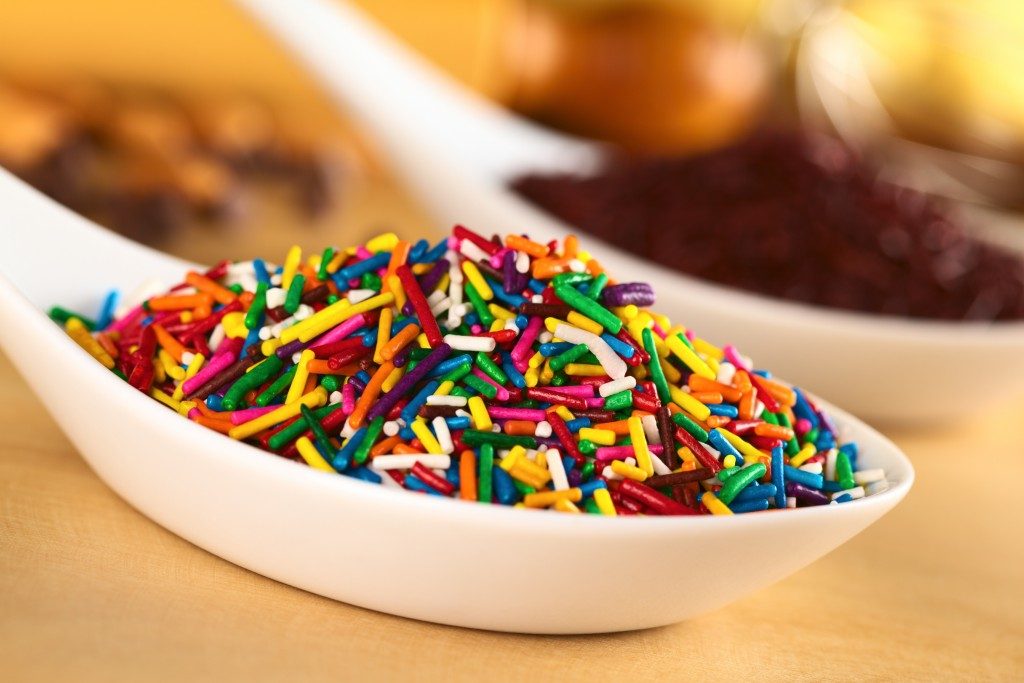 The food world is obsessed with sprinkles.

American manufacturers refer to the long decorations as sprinkles. In Britain, they are known as “hundreds-and-thousands” because you cannot count them. In the northeastern U.S., sprinkles are often referred to as jimmies. The sprinkles known as nonpareils are tiny balls that were originally white, but that now come in many colors.

While many candy companies claim to have invented sprinkles, the elongated shape belongs to the Dutch. Known as “hagelslag,” it was invented in 1936 and used on bread and butter as a treat. They were named hagelslag because they resemble hail — a common occurrence in Scandinavia.

In 1989, the Pillsbury baking company introduced a Funfetti cake mix, a white cake mix with multicolored sprinkles included in the box. The twist was that the sprinkles were for coloring the batter, not for decorating the top. In a hot oven, the sprinkles melted into streaks and dots of bright color that instantly made plain cake extremely attractive to kids.

There were, of course, many copycats — sprinkles or Funfetti began appearing in all types of mixes as well as drinks, yogurt and ice cream. In home kitchens, rainbow sprinkles showed up in pancakes and waffles, cookies and cupcakes. In recent years, mostly spurred on by social media, confetti-colored sprinkles have coated the entire world of baking. In fact, a famous food blogger had sprinkles thrown at her wedding instead of rice! 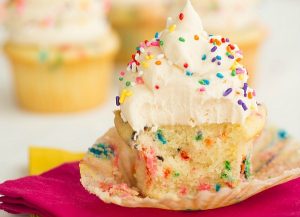 1/2 cup sprinkles, plus more for sprinkling on top before baking

In a large bowl using a mixer with paddle attachment, cream the margarine and sugar on medium speed until fluffy and light in color. Mix in eggs and vanilla. Scrape down the sides as needed. Set aside.

In a medium-size bowl, whisk together the flour and baking powder. With the mixer running on low speed, slowly add the dry ingredients to the wet ingredients. Once combined, fold in the sprinkles.

Using a medium cookie scoop, portion the dough into balls. Add a few more sprinkles on top of each cookie. Chill the cookies for 30 minutes. This will prevent spreading in the oven.

Remove from oven and take out of the pan. Cool.

Cream shortening and margarine in a large bowl using an electric mixer. Add vanilla. Gradually add sugar, one cup at a time, beating well on medium speed. Scrape sides and bottom of bowl often. When all sugar has been mixed in, icing will appear dry. Add water and beat at medium speed until light and fluffy. Keep bowl covered with a damp cloth until ready to use.

To frost a cupcake, use a large pastry bag fitted with large star tip. Fill with icing and starting at outer edge, squeeze bag and pipe a spiral.

“Shpritz” the top of the cream with more sprinkles to decorate.