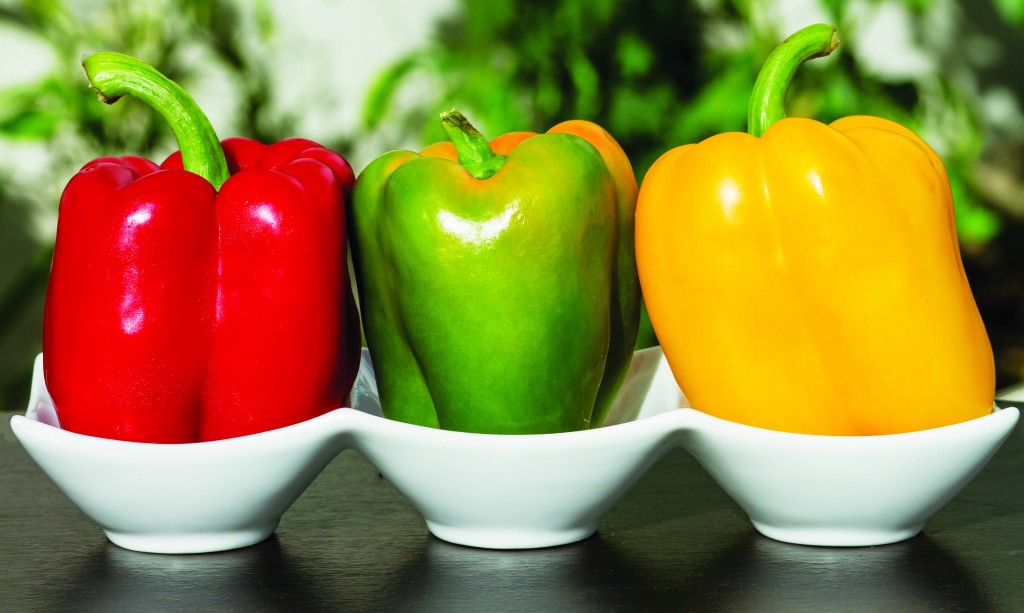 All peppers, sweet or hot, belong to the same plant family. The sweet peppers are referred to as “bell peppers” for their bell-like shape. They also do not contain capsaicin — the component that gives hot peppers their heat. Did you know all red, yellow and orange peppers start out green? The color changes and their sweetness increases depending on how long they’re allowed to ripen on the vine.

The name “pepper” came about as the result of Christopher Columbus confusing the pepper plant with the peppercorn plant, which was highly prized at that time. He believed he had landed in India and consequently assumed that the plant he discovered was the very same “pepper” that Europeans sought.

Pepper seeds were later carried to Spain in 1493 and from there to other European, African and Asian countries. Today, China is the world’s largest pepper producer, followed by Mexico and Indonesia.

The color can be green, red, yellow, orange and more rarely, brown, white, rainbow (between stages of ripening) lavender and dark purple, depending on the variety. One variety, Permagreen, maintains its green color even when fully ripe. Green peppers are less sweet and slightly more bitter than yellow or orange peppers, with red bell peppers being the sweetest. The taste of the peppers can also vary with growing conditions and weather. The sweetest are peppers allowed to ripen fully on the plant in full sunshine, while those harvested green and ripened in storage are less sweet.

Bell peppers are available year-round, but they’re at their best in late summer and throughout fall.

Their amazing array of colors make peppers a wonderful addition to salads, stir-fry and sautéed or roasted vegetables.

Bell peppers are also an excellent source of vitamins A and C, as well as a variety of other nutrients. Plus, they are rich in antioxidants and other cancer-fighting components. Because peppers are sweet, they are usually easy to introduce to children. Serve them sliced with low-fat dressing or guacamole. Kids will eat them!

You can also try some of our favorite pepper recipes for dinner tonight. 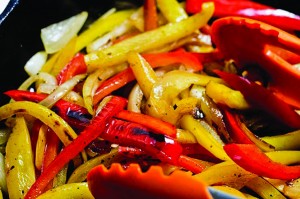 A quick and easy side dish that will make your dinner plate especially attractive.

In a large skillet, heat the oil over high heat. Add the pepper strips, and sauté for 4–5 minutes, or until the peppers begin to soften. Turn down the heat to low, and add the garlic, salt and pepper. Sauté for 2 minutes more. Turn off the heat and add the vinegar and herbs. Toss to combine. Transfer to a bowl and allow to cool to room temperature. Toss again, adjust seasoning and serve. 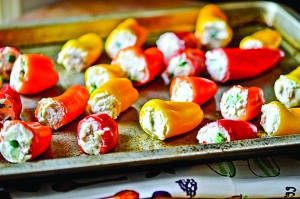 The variety of mini sweet peppers now available in fruit markets lends itself to lots of attractive appetizers like this one. Try it for your next melaveh malkah.

Preheat the oven to 350°F and line a baking sheet with aluminum foil.

Slice the peppers from stem to tip on one side, leaving the stem intact. Carefully remove the seeds (there aren’t too many).

In the bowl of a food processor, process the basil, rosemary and sundried tomatoes. Pulse until evenly chopped and the mixture is very fine. Remove from the food processor and place in a mixing bowl. Add the feta and combine.

Use a small spoon to stuff the feta mixture into the peppers. Place stuffed peppers on the prepared baking sheet.

Bake for 8–10 minutes, until peppers are just starting to soften. Transfer to a serving dish and serve hot or cold.

Using red and orange peppers will give your soup amazing color!

In a heavy stockpot, heat the oil over medium-high heat. Dice the peppers.  Add the peppers, potato, onion, salt, and red pepper flakes. Cook, stirring, for 1 to 2 minutes. Reduce the heat to low, cover and simmer, stirring occasionally, until the vegetables are tender, about 1 hour. Remove from heat and let cool slightly.

Transfer to a blender or food processor and purée in batches, or purée completely with a hand blender. Force the pepper pulp through a coarse strainer or a food mill.  Return the liquids to the pot and stir in the vegetable or chicken stock, adding a bit more if you like a thinner soup. Taste and adjust the seasonings.

Reheat and serve, garnished with a sprig of dill.  Makes 4 servings