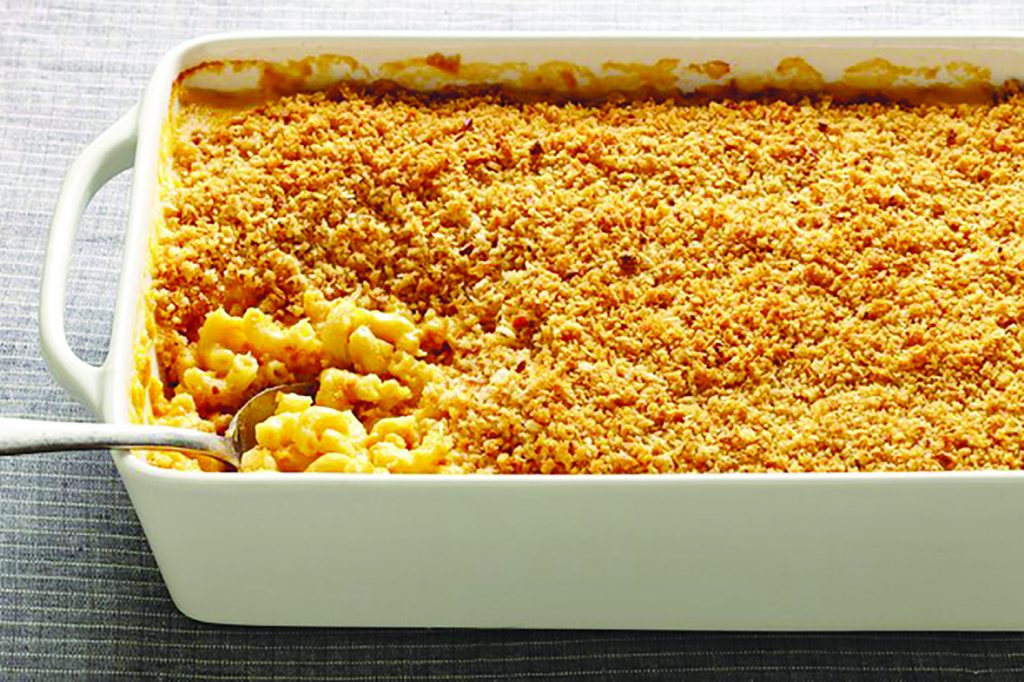 Macaroni is any pasta made without eggs. While generally thought of as just the elbow tube shape, macaroni can be any shape, including shells, twists, ribbons, penne, rigatoni and ziti.

Although Marco Polo wrote about eating Chinese pasta on his travels, he probably did not introduce pasta to Italy. In fact, there is evidence suggesting the Italians’ ancestors made pasta long before Marco’s travels.

Thomas Jefferson is credited with introducing macaroni to the United States. It seems that he enjoyed it in Naples while serving as the U.S. ambassador to France. In fact, he promptly ordered crates of “maccaroni,” along with a pasta-making machine, sent back to the States.

During the ’80s, macaroni, which was traditionally considered a “blue-collar” down-home meal, was transformed into the more upscale “pasta.” As more and more people began to dress it up throughout the ’60s and ’70s, its image began to change along with its name.

Bring 4 quarts of water to a boil in a large pot and add salt and pasta. Cook 8–10 minutes or until slightly soft. Drain well and set aside.

Heat oil in a medium sauté pan and cook onions and mushrooms, stirring occasionally, until soft, about 5 minutes. Remove from heat and add to pasta.

In the same sauté pan, melt the butter over medium-high heat. When melted, whisk in the flour. A whisk is important for preventing lumps. Allow mixture to bubble for 2 minutes. Slowly whisk in the milk, one cup at a time. Simmer 5 minutes, stirring occasionally. Remove sauce from heat and add the shredded cheese. Stir in the chili powder, paprika and salt. Combine sauce with pasta and spread into the prepared baking dish.

Stir together panko, Parmesan and butter until the crumbs are well coated. Sprinkle crumbs evenly over pasta. Bake 30 minutes or until the casserole is bubbling at the edges and the crumbs are toasted. Remove from the oven and let rest 10 minutes before serving.

Bring a large pot of lightly salted water to a boil. Add pasta and cook for 8 to 10 minutes or until al dente; drain.

Meanwhile, melt the butter in a large saucepan over medium heat. Stir in the onion, and cook for 3 minutes until it begins to soften. Add the garlic, and continue cooking until the onion has softened and turned translucent, about 2 minutes more. Slowly stir in the flour, and cook, stirring constantly for 5 minutes.

Stir in the milk, and bring to a simmer. Reduce heat to medium-low and stir in mustard powder; simmer for 10 minutes, stirring occasionally. Add 1 cup of Parmesan cheese, along with the cream cheese and other cheeses; stir until melted. Season to taste with salt and pepper, then stir in the drained macaroni. Pour into the prepared baking dish. Sprinkle the remaining 1/2 cup of Parmesan cheese and breadcrumbs over the macaroni.

Bake in preheated oven until bubbly and brown, about 30 minutes. Remove from the oven and allow to stand 5–10 minutes before serving.