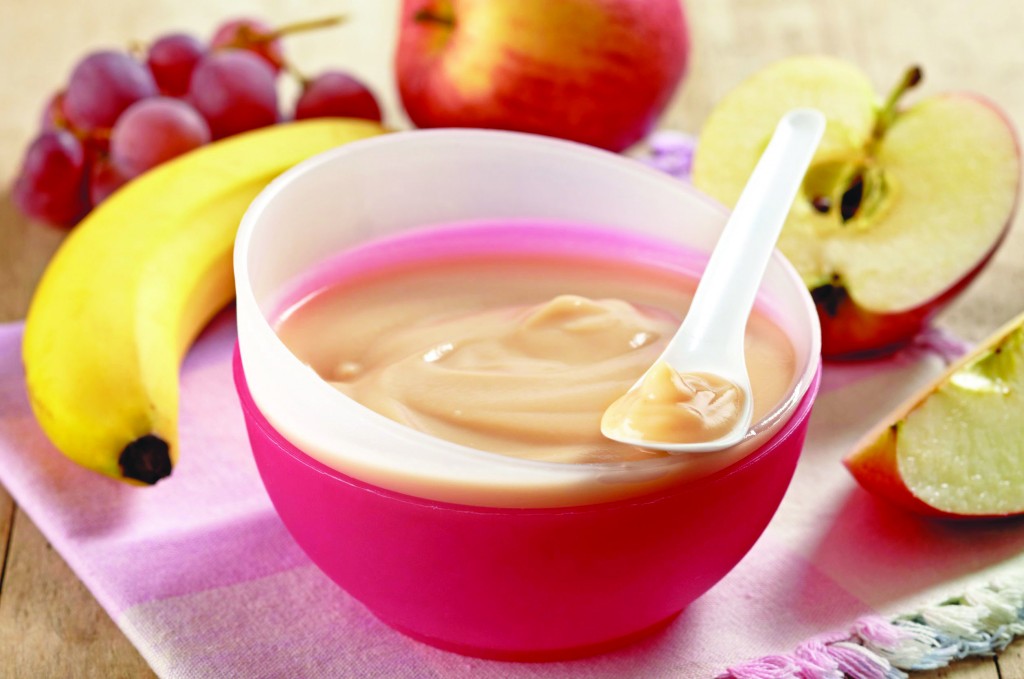 The first few months of a child’s life are a glorious — and healthful — time for eating. There are the tentative swallows of soupy cereal grains. The sweet bites of neon-green puréed peas. The smears of earthy carrots. How and when do things go so horribly wrong for so many Americans? Why is it that by the time millions of us are adults, we are subsisting on diets full of saturated fats and processed sugars?

To pinpoint exactly when our diet starts to go awry, researcher Victor Fulgoni analyzed data from the National Health and Nutrition Examination Surveys from 2001–2012 for 4,406 children under the age of two. That information is collected by government researchers based on surveys of caregivers. The participants, who are selected based on a complex statistical process, were asked during in-person interviews to list what their child ate over a 24-hour period. Fulgoni tallied the top 10 food sources for fruits, vegetables, whole grains and added sugars in three-month increments and then calculated an estimate for the amount of sodium and added sugars they were consuming.

The findings show that bad habits start much, much earlier than you might think — as early as in the toddler years, a situation that places at least part of the blame for your poor eating squarely on your parents.

“When [nursing] begins to stop, and they transition to regular foods, that’s when we see the American diet creeping in,” Fulgoni said in an interview. “We’re not talking about super-sized fries or soft drinks, but there’s enough that it’s concerning.”

Now Fulgoni is a consultant working for Beech-Nut Nutrition, which makes baby foods, and his job is to help companies make nutritional claims about their products. He has previously done the same for Kellogg. But this latest analysis — based on publicly available data gathered by the The National Center for Health Statistics, a part of the Centers for Disease Control and Prevention, so it is easily reproducible by others — isn’t associated with a particular product. The work is being presented this week at an academic conference in San Diego that focuses on things such as nutrition, pharmacology and physiology.

There’s not much to tell about the analysis of the earliest months — from zero to eight months. Babies are generally consuming what they should, which is mother’s milk or formula with baby cereal and mushed-up vegetables and fruit.

It’s at around nine months when things start to get a little weird. While a child’s diet at that time is mostly full of good stuff (string beans, oatmeal, rice, peaches, yogurt and crackers are at the top of the lists), you can already see small amounts of the bad stuff — brownies and cakes — showing up. At the beginning of the toddler period, 12 to 14 months, you see potato chips and soft drinks.

By their first birthdays, American kids’ diets are already completely unbalanced, according to Fulgoni’s analysis.

The good news, if you can call it that, is that more than 60 percent are eating fruit on any given day. But half of that comes from juice, which can be overloaded with sugars. Bananas and apples are the next most popular. Vegetables are more of a problem. On any given day only 30 percent of one-year-olds are eating them, with the main source being whole or mashed potatoes.

So what are they eating? About 40 percent of them are filling their diets with things like brownies, cookies, crackers and other salty snacks.

The result, Fulgoni said, is that children at this age are consuming more than 5 teaspoons of added sugar and more than 1,500 milligrams of sodium a day, which is similar to what many nutritionists recommend as a limit for adults.

Part of the reason parents may be giving their babies junk foods at such an early stage may be experimentation. After all, which new parent isn’t tickled to hear the squeals of delight when they give their child his first bite of mint chocolate chip ice cream or birthday cake? But the data shows that once introduced, these types of foods stick around.

Another striking aspect of the findings has to do with added sugars, which are found in baked goods, packaged juice and soda, and which, in large quantities, are believed to raise your risk for obesity and chronic conditions, such as diabetes and heart disease.

To understand just how large an amount that is, it’s important to note that the most recent update of the Dietary Guidelines for Americans, the influential recommendations that help set school lunch menus and food labeling, recommend that Americans get less than 10 percent of calories from added sugars. Many nutritionists recommend it to be closer to 5 percent. Let’s take the average, or 7.5 percent. Based on a 2,000-calorie diet, that amounts to 150 calories or 9 teaspoons a day for a full-grown man. That’s roughly the equivalent of three Double Stuff Oreo cookies.

The analysis comes at a time when there is increasing emphasis on early intervention in everything from diet and exercise to the treatment of developmental delays. The 2014 Farm Bill called for the Dietary Guidelines for Americans to include recommendations for birth to age two, starting with the 2020 edition, for the first time based on the idea that if we can modify children’s eating early in life we can sustain those changes for life.

Fulgoni emphasized that his goal is not to “shame parents with this information.” One limitation of the study is that it’s based on a caregiver’s memory of what a child ate, and there could be gaps or information that’s fuzzy. But he said he was surprised at how much not-so-good-for-you food they admitted to giving their charges.

“I think they are doing the best they can,” he said. “It is a stressful period to get children to eat what you want them to eat. And sometimes you just want them to eat, period.”