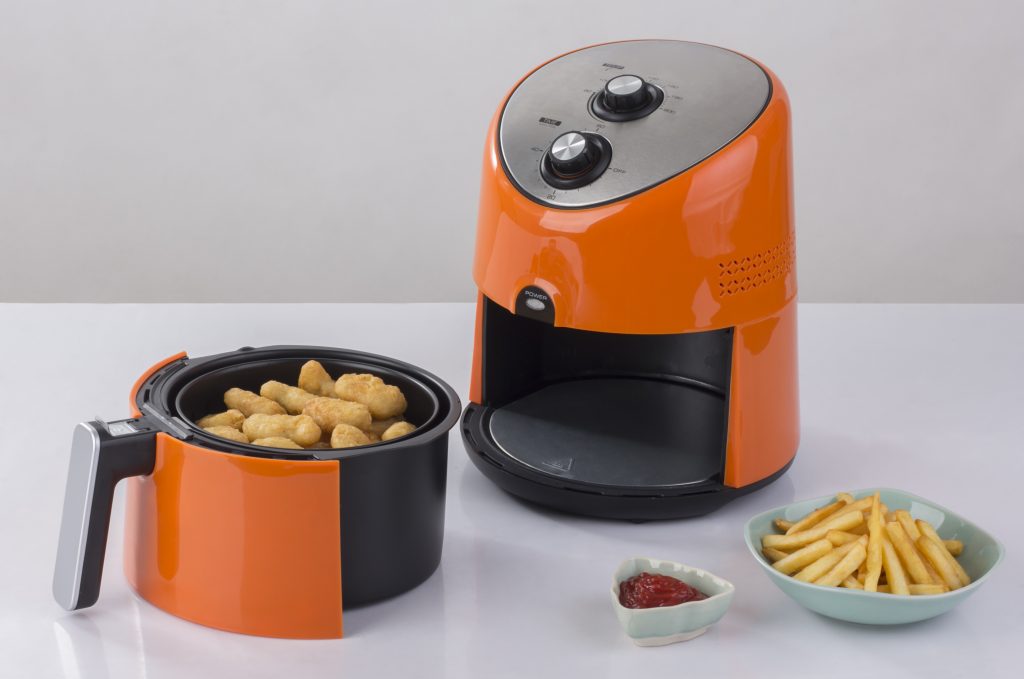 In recent years, any tool that rendered people more efficient in the kitchen and more effective in reaching their health goals seemed to sell. The slow cooker launched the trend, the rice cooker had its day before the pressure cooker held court, and even the spiralizer had five minutes of fame until grocery stores started selling already-spiralized noodles.

The latest, trendy kitchen tool that I originally assumed was full of hot air (pun intended) is the air fryer. First, why would I want to accustom my family to eating foods that taste fried? Second, I cringed at bringing another large countertop appliance into my kitchen. Yet curiosity got the better of me, and after borrowing a friend’s air fryer for a few days, I flipped my stance and ordered my own.

Why do I love it so much? The air fryer makes the crispiest vegetables in half the time of roasting, turns traditionally unhealthful foods into healthful ones (think chicken wings or General Tso’s chicken), reheats leftovers more efficiently than an oven and more tastily than a microwave, and perfects snack foods such as kale chips and crispy chickpeas.

Our family is eating more winter vegetables such as squash, sweet potatoes and kale since we bought our air fryer, because it makes these foods taste so delicious and cooks them in the time it takes to set the table and gather everyone for dinner. It is the healthiest and swiftest way to crisp any food.

In case you haven’t seen one of these appliances, an air fryer is a countertop convection oven. That means it circulates hot air both above and below the food, cooking and crisping evenly and efficiently. The air fryer cooks more quickly than a countertop convection oven and is more suited to baked goods. The food is placed in a slide-out basket that is easy to fill, quick to empty and usually dishwasher safe. The devices range in size from about two to six quarts and in price from about $70 to $300.

You can cook traditionally fried foods with radically less oil; imagine french fries and wings without splattered grease and unhealthful trans fats. You can make almost anything in an air fryer that you would normally cook in an oven. Many of the new models have settings to roast, bake and grill, too.

My kids and I have been playing around with our new six-quart air fryer, and here are some of our favorite dishes:

Initially, I had been under the impression that the air fryer would crisp foods without any oil, but some items, especially drier foods such as potatoes and cauliflower, need some oil. Ideally, food should be placed in a single layer (having a second rack and a larger air fryer helps here) so that both the top and the bottom surfaces are hit by the circulating air.

Some cookbooks suggest flipping the food halfway, as when cooking in a regular oven, but I don’t find the need because the air is hitting both sides of the food. If you want to cook a lot of food at once, it helps to buy a second rack for the device.

Other tips include letting the air fryer preheat for a few minutes and using a mister to lightly spritz the food with oil instead of tossing food in oil like you would before roasting.

Buy a product that has an easy-to-wash or dishwasher-safe basket and rack, as I believe you will be using this gadget regularly.

This machine is all-season. It makes an excellent gift because it does not heat up a kitchen as an oven can…

Truthfully, the air fryer takes up a lot of counter space, and if you want to use it to cook for a family you will need a large one, which is even harder to stash and pricier.

For folks who lament that there never seems to be enough time, or who are determined to get healthier, the air fryer is the new pressure cooker.