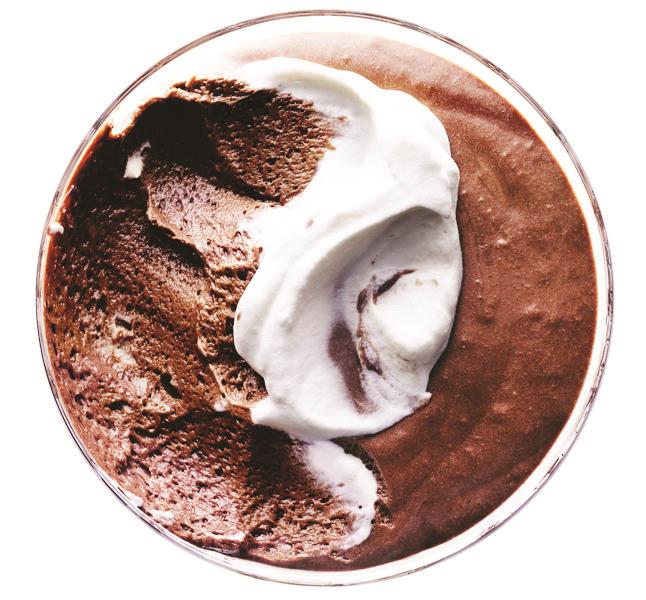 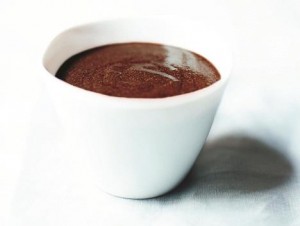 Mousse, the French word for “foam,” is a prepared food that incorporates air bubbles to give it an airy texture. It can range from light and fluffy to creamy and thick, depending on preparation techniques. A mousse may be sweet or savory. Dessert mousses are typically made with beaten egg whites or whipped cream, and most often flavored with chocolate or puréed fruit. Savory mousses can be made of fish and may contain herbs for flavoring. They sometimes rely on unflavored gelatin to hold their texture and shape.

The first written record of chocolate mousse in the United States comes from a food exposition held at Madison Square Garden in New York City in 1892.

A “Housekeeper’s Column” in the Boston Daily Globe of 1897 published one of the first recipes for chocolate mousse. The dish was more like chocolate pudding, instead of today’s stiff, but fluffy, mousse.

Mousse became popular with the introduction of electric mixers as this made the foaming process much, much easier. As a matter of fact, mousse is so popular that it’s even got its own national holiday! You can celebrate National Mousse day on Monday, November 30, by trying one of our tasty recipes below.

Combine egg yolks, espresso, salt and 2 tbsp. sugar in a large metal bowl. Set over a saucepan of gently simmering water (do not allow bowl to touch water). Cook, whisking constantly, until mixture is lighter in color and almost doubled in volume, about 1 minute.

Mousse can be made 1 day ahead; cover and keep chilled. Let stand at room temperature for 10 minutes before serving.

Before serving, whisk remaining 1/4 cup cream in a small bowl until soft peaks form; pipe or spoon over mousse.

In a double boiler, melt together the chocolate and margarine, whisking over the barely simmering water, until smooth. Remove from heat.

In a large bowl, whisk the yolks of the eggs with the 2/3 cup of sugar and liqueur for about 3 minutes, until the mixture is thick. Then fold the chocolate mixture into the egg yolks.

Fold one third of the beaten egg whites into the chocolate mixture, then fold in the remainder of the whites just until incorporated, but don’t overdo it or the mousse will lose volume.

Transfer the mousse to 6 martini glasses or dessert bowls and refrigerate for at least 4 hours, until firm.