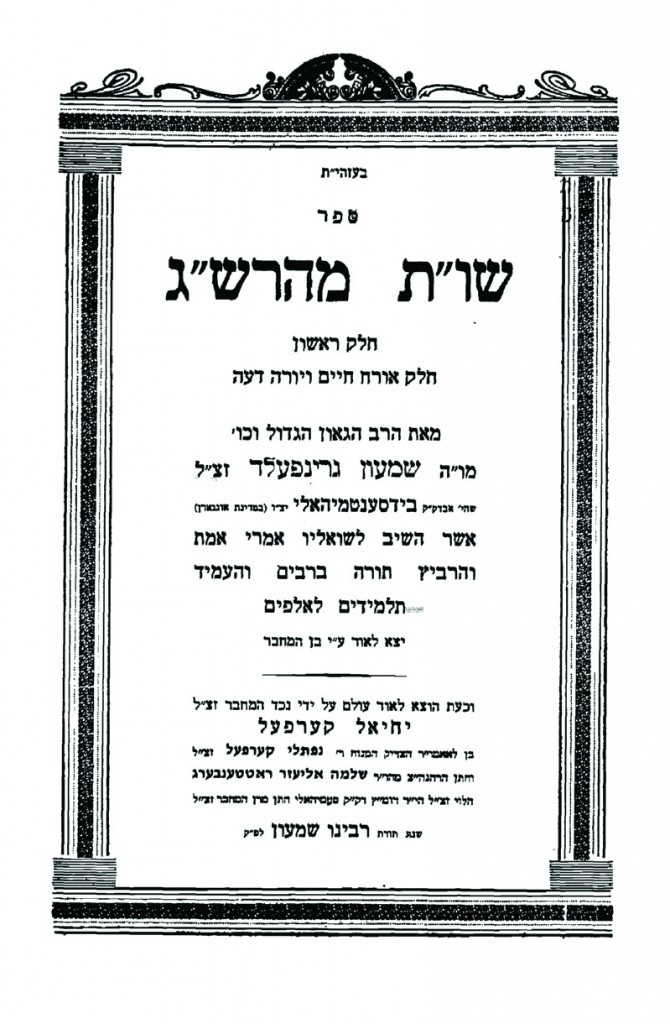 In 5109/1349, 700 Jews of Basel, Switzerland, were burned alive in wooden houses especially constructed for that purpose. Hy”d.

Harav Shimon Greenfeld was born in Chust, Hungary, on 4 Cheshvan 5621/1860. His father was Harav Yehudah, who served as Rav of Semihali. The family was descended from the Tosafos Yom Tov.

As a young bachur, Reb Shimon learned in the yeshivah of Harav Avraham Yehudah Schwartz, the Kol Aryeh, in Bergsas. Later, he learned under the Maharam Shick, whom he considered his rebbi muvhak.

Reb Shimon married at the age of 16. He dedicated himself to learning day and night and was considered an outstanding talmid chacham. At the age of 34, he was asked to serve as Dayan in Munkacs.

In 5668/1908, Reb Shimon was appointed to succeed his father as Rav of Semihali.

His name was known throughout the Torah world, and many halachic she’eilos were addressed to him. This was the basis of his three-volume She’eilos U’teshuvos Maharshag, which contains thousands of teshuvos. Also published were Zahav Shva on the Torah and Maharshag al HaTorah. Other works of Reb Shimon are still in manuscript form, including his chiddushim on many masechtos of Shas, Hilchos Mikvaos and Hilchos Taaruvos.

Reb Shimon was also well versed in Toras hanistar, which he learned under Harav Yitzchak Eizik Weiss, Rav in Swalieva. Reb Shimon was known for his tremendous humility and his exalted middos.

In 1862, the ironclad U.S.S. Monitor was launched from the Continental Iron Works in Greenpoint, N.Y., during the Civil War.

In 1948, Indian political and spiritual leader Mohandas K. Gandhi, 78, was shot and killed in New Delhi by Nathuram Godse, a Hindu extremist.

In 1959, M.S. Hans Hedtoft, said to be the safest ship afloat and “unsinkable” like the R.M.S. Titanic, struck an iceberg on her maiden voyage and sank, killing all 95 aboard.

In 1964, the United States launched Ranger 6, an unmanned spacecraft carrying cameras, that crash-landed on the moon but failed to send back images.

In 1968, the Tet Offensive began during the Vietnam War as communist forces launched surprise attacks against South Vietnamese provincial capitals.

In 1972, Pakistan withdrew from the Commonwealth of Nations.

In 1981, an estimated 2 million New Yorkers turned out for a tickertape parade honoring the freed American hostages from Iran.