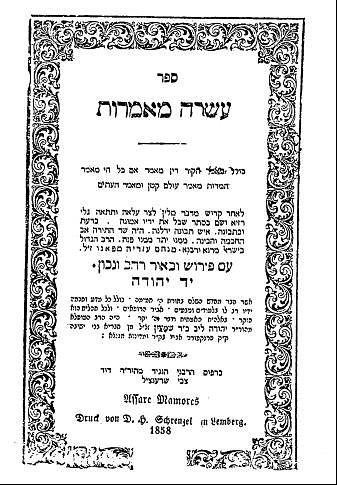 In 3314, the silver and gold that Ezra and his followers brought along to donate to the second Beis Hamikdash was weighed.

In 3317, Nechemiah began to construct a wall around Yerushalayim. The construction took 52 days.

5701/1941, Harav Benzion Halberstam, Hy”d, the second Bobover Rebbe, mechaber of Kedushas Tziyon. He was killed, along with thousands of other Jews, by the Nazis in a forest near Lvov.

Harav Menachem Azaryah was born in 5308/1548, in Pano, Italy. His father was Harav Yitzchak Berachyah.

He married the daughter of Harav Yitzchak Poah of Mantua, zt”l, who was one of the leading talmidei chachamim in Italy. While living near his father-in-law, he grew greatly in Torah.

Rav Menachem was introduced to Kabbalah in his youth by the leading Italian mekubal of the time, his uncle Harav Ezra of Pano, zt”l. Because the Arizal’s teachings had not yet reached Italy, he learned the methodology of Harav Moshe Cordovero, zt”l, the Ramak. The Rama (as Rav Menachem was known) had such a love for all the Ramak’s writings that after the petirah of the Ramak, he sent a huge sum of money to acquire a copy of his unpublished commentary on the Zohar, Ohr Yakar.

The Rama’s fame spread to Eretz Yisrael, and Harav Yosef Karo, zt”l, put him in charge of printing his commentary to the Rambam, Kesef Mishneh, in Venice in 5334/1574.

After he painstakingly achieved proficiency in Ramak’s writings, Rav Menachem’s life turned upside down when Harav Yisrael Seruk, zt”l, arrived in Italy from Eretz Yisrael to spread the teachings of his own Rebbi, the Arizal. The Rama became one of his avid talmidim. However, he emphasizes that despite the loftiness of the Arizal’s teachings, he continued to revere the Ramak’s teachings.

Due to his love for the secrets of the Torah and their dissemination, Rav Menachem taught many talmidim. Each day he taught another topic from Pardes Rimonim, one of the primary texts of Kabbalah.

He wrote about 30 sefarim, including a collection of Responsa that rely heavily on the Zohar. His best-known sefer is Asarah Ma’amaros.

The Rama of Pano was revered by the greatest talmidei chachamim of his era.

He was niftar on 4 Av, 5380/1620 and was mourned all over Italy, especially in Mantua and Venice. Special kinos were composed in his honor.

In 1964, U.S. Navy pilot Everett Alvarez Jr. became the first American flier to be shot down and captured by North Vietnam; he was held prisoner until February 1973.

In 1981, the federal government began firing air traffic controllers who had gone out on strike.

In 2002, the coral-encrusted gun turret of the Civil War ironclad USS Monitor was raised from the floor of the Atlantic Ocean, nearly 140 years after the historic warship sank during a storm.