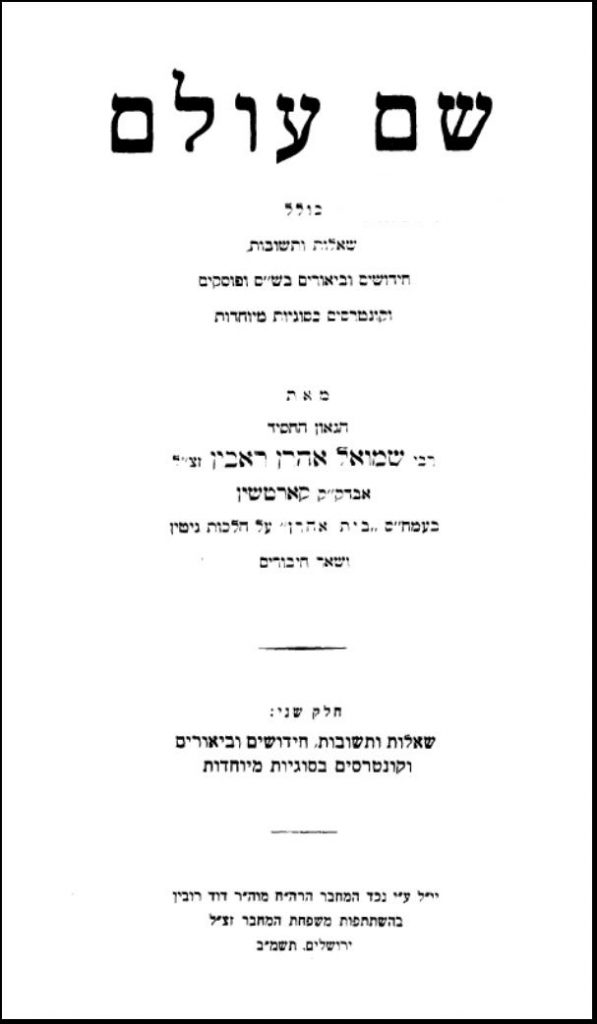 In 5498/1738, a Jew and a Russian naval officer who had converted to Judaism, having been influenced and/or taught by that Jew, were both burned at the stake in St. Petersburg, Hy”d.

2310, according to some opinions, Yosef Hatzaddik. He was also born on this date in 2200. According to most opinions, he was born and was niftar on 2 Tammuz.

He learned under Harav Moshe Wolf Frenkel, zt”l, Rav of Pshevorsk and mechaber of Meishiv Kahalachah. After his marriage, he settled in Brigel, where his father-in-law lived, and became close to Harav Aryeh Lifschitz, zt”l, the Aryeh D’bei Ilai. Following the petirah of the Aryeh D’bei Ilai, he traveled to the court of the Divrei Chaim of Sanz, zy”a.

Rav Shmuel Aharon was also close with the leading Poskim of his time, especially Harav Yosef Shaul Natansohn, zt”l, who wrote him many halachic responsa, and gave a warm haskamah to his sefer Beis Aharon on hilchos Gittin.

In 5625/1865, Rav Shmuel Aharon was appointed Rav of Zvarow, and a short while later, of Kartshin. The Divrei Chaim, together with Harav Tzvi Hirsch of Rimanov, zy”a, wrote a letter to the kehillah of Kartshin in praise of their new Rav.

In 1940, during World War II, the Battle of Britain began, as the Luftwaffe started attacking southern England. (The Royal Air Force was ultimately victorious.)

In 1919, President Woodrow Wilson personally delivered the Treaty of Versailles to the Senate and urged its ratification. The Senate rejected it.

In 1929, American paper currency was reduced in size, as the government began issuing bills that were approximately 25 percent smaller.