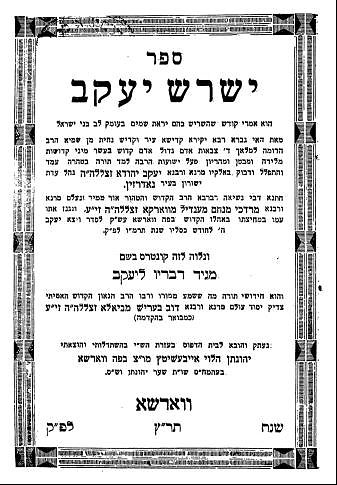 Harav Dov Berish Landau of Biala was born in 5580/1820. His father was the famous gaon, Harav Avraham, Rav of Chechenov, zt”l. He was named for his grandfather, the well-known Harav Berish Chassid, zt”l, one of the tzaddikim nistarim of his generation.

Rav Dov Berish married the daughter of a well-to-do talmid chacham, Reb Artshe of Biale. His father-in-law supported him for the first few years of his marriage.

Later, he needed to seek a rabbinic position.

Harav Shraga Feivel of Gritza, zy”a, father of Harav Yechiel of Alexander and the founder of the Alexander Chassidic dynasty, made a bris for his son. Harav Yitzchak, Rebbe of Vorka, zy”a, was the sandak. Rav Dov Berish was also present, and conversed with the Vorka Rebbe. Afterwards, he traveled with Rav Yitzchak to Vorka, becoming a very close Chassid of his.

Some people tried to cause a split between the Chechenover Rav and his son, Reb Berish, by claiming that due to his interest in Chassidus, his Torah learning suffered.

Rav Avraham summoned his son home. They began a Torah discussion, talking in deep pilpul for many hours, and Rav Avaham was assured of this son’s stature in Torah.

After the petirah of Harav Yitzchak of Vorka, Rav Dov Berish became a devoted Chassid of his son, Harav Menachem Mendel of Vorka.

On 16 Sivan, 5628/1868, Reb Mendel was niftar, and Reb Dov Berish was chosen to fill the void. This was during the lifetime of his father, Rav Avraham Chechenover.

He led the Chassidim for over seven years, a period known as sheva shnos hasova — “the seven years of plenty,” due to the abundance of shefa that he brought down to his Chassidim.

Rav Dov Berish was weak all his life, but disregarded his own body, expounding his divrei Torah at length with mesirus nefesh. He was also known as a baal mofes; many sick people would mention their names to him for a refuah.

In 1786, in New York City, commercially manufactured ice cream was advertised for the first time.

In 1869, Ives W. McGaffey received a U.S. patent for the suction vacuum cleaner.

In 1872, the penny postcard was authorized by the U.S. Congress.