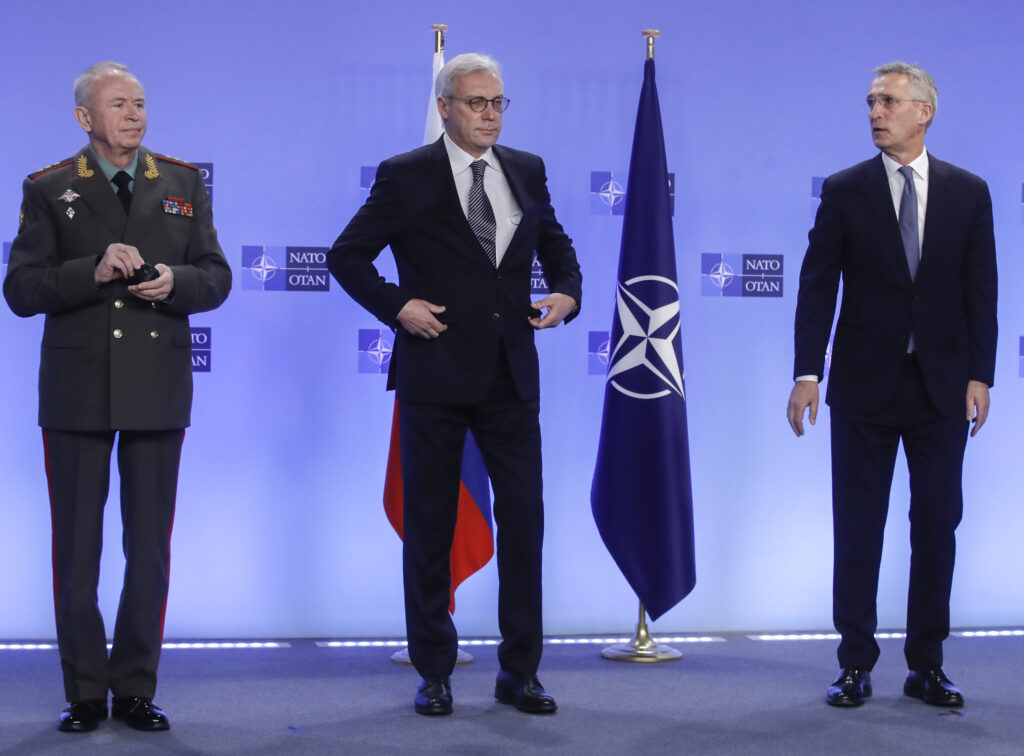 Senior NATO and Russian officials were meeting Wednesday to try to bridge seemingly irreconcilable differences over the future of Ukraine, amid deep skepticism that Russian President Vladimir Putin’s security proposals for easing tensions are genuine.

The talks come during a week of high-stakes diplomacy and a U.S.-led effort to prevent preparations for what Washington believes could be a Russian invasion of Ukraine. Moscow denies it is planning an attack. Still, its history of military action in Ukraine and Georgia worries NATO.

NATO Secretary-General Jens Stoltenberg, Russian Deputy Foreign Minister Alexander Grushko and Deputy Defense Minister Alexander Fomin were stern-faced as they posed for the media before the NATO-Russia Council. There was no public handshake, although the Russian delegation fist-bumped officials from the 30 NATO member countries inside the meeting venue.

The meeting, the first of its kind in over two years, was due to run for about three hours. The NATO-Russia Council, their chief forum for talks, was set up two decades ago but full meetings paused when Russia annexed Ukraine’s Crimean Peninsula in 2014. It has met only sporadically since, the last time in July 2019.

With around 100,000 combat-ready Russian troops backed by tanks, artillery and heavy equipment massed just across Ukraine’s eastern border, Wednesday’s gathering has taken on great significance, yet it still seems destined to fail.

“These are completely unacceptable proposals,” Estonian Defense Minister Kalle Laanet told public broadcaster ERR on the eve of the talks.

Estonia, like its Baltic neighbors Latvia and Lithuania, relies on U.S. security guarantees provided by its membership in NATO. The three Baltic nations were once ruled by the Soviet Union but are now part of the European Union and NATO.

Putin says Russia’s demands are simple, but key parts of the proposals contained in the documents that Moscow has made public — a draft agreement with NATO countries and the offer of a treaty between Russia and the United States — won’t pass muster at the 30-country military organization.

NATO would have to agree to halt all membership plans, not just with Ukraine, and scale down its presence in countries like Estonia close to Russia’s borders. In exchange, Russia would pledge to limit its war games, as well as end aircraft buzzing incidents and other low-level hostilities.

Endorsing such an agreement would require NATO to reject a key part of its founding treaty. Under Article 10 of the 1949 Washington Treaty, the organization can invite in any willing European country that can contribute to security in the North Atlantic area and fulfill the obligations of membership.

“It has become crystal clear that not a single ally inside the NATO alliance is willing to budge or negotiate anything as it relates to NATO’s open door policy,” Julianne Smith, the U.S. ambassador to NATO, said Tuesday. “I cannot imagine any scenario where that is up for discussion.”

Maksim Samorukov, a fellow at the Carnegie Moscow Center think tank, says the lack of any real Russian concessions in Putin’s draft agreement probably means that “Russia is ready to tolerate a failure of these negotiations.”

The idea, Samorukov said, is to “demonstrate to the West that we are serious, we mean business. That Russia is really ready to take drastic steps to impose these concessions” on the U.S.-led military organization.

Still, NATO can’t afford to ignore Russia’s offer. Some members fear that Putin may be seeking a pretext to launch an invasion — like the failure of the West to engage — and any talks that would ease tensions over border forces, missile deployments or war games would be welcome.

For the Kremlin, though, time is of the essence.

Spokesman Dmitry Peskov said Tuesday that this week’s talks have, so far, provided little reason for optimism. He said the outcome of Wednesday’s meeting, and one at the Organization for Security and Cooperation in Europe on Thursday, could determine whether it makes sense to continue talking.