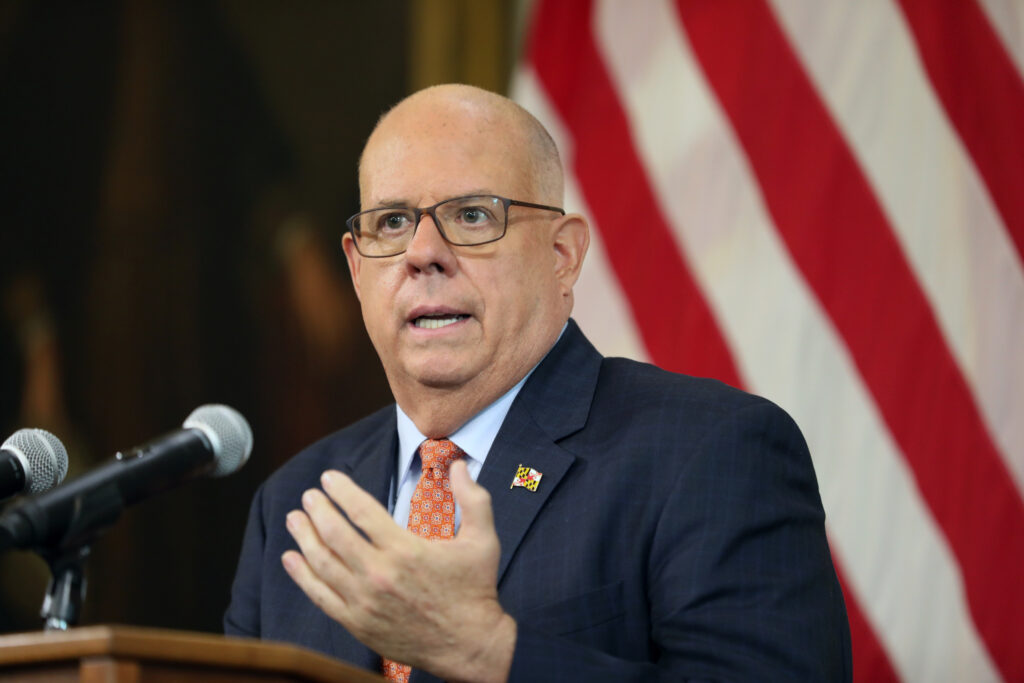 Senate Minority Leader Mitch McConnell and other top Republicans are stepping up a personal campaign to persuade Maryland Gov. Larry Hogan to run for the Senate and help the party’s chances of regaining control of the chamber.

The recruitment effort has included McConnell’s wife, Elaine Chao, who held Cabinet positions in the Trump and George W. Bush administrations. Moderate Senate Republicans, including Susan Collins of Maine, have also been in direct contact with Hogan to note that his centrist brand of politics would be welcome in a chamber riven with partisanship. Several other Washington officials have made financial pledges or shared internal polling to try to convince Hogan that he has a path to victory.

President Joe Biden carried Maryland by 32 percentage points in 2020 and a Republican hasn’t won a statewide federal office in more than 30 years. Hogan, who is prevented by term limits from running for reelection, has long resisted the idea of challenging Democratic incumbent Sen. Chris Van Hollen. One of the GOP’s most prominent critics of former President Donald Trump, Hogan has toyed with mounting a presidential campaign in 2024.

Still, his willingness to recently engage with high-profile recruiters suggests Hogan has not ruled out a Senate run. If he were to enter the Senate race instead, it would force Democrats to devote money and other resources in a longtime blue state at a time when they’re already bracing for a difficult campaign season across the country.

Hogan maintained on Monday that he remains focused on his work as governor.

“While I appreciate all the encouragement and outpouring of support in Maryland and across the country, my focus continues to be on leading Maryland through the COVID-19 pandemic, continuing our economic recovery and addressing rising violent crime,” Hogan told The Associated Press. “As long as I have the honor to serve as governor, I’m going to give this job everything I’ve got.”

Hogan’s decision, which must come before the Feb. 22 filing deadline, is among the last major unanswered questions as the Senate landscape begins to settle heading into the first midterm election cycle of Biden’s presidency.

Publicly, Democrats remain confident about their standing in a state where Democrats outnumber Republicans 2-to-1.

For their part, McConnell and Florida Sen. Rick Scott, who leads the GOP’s Senate campaign arm, have held multiple recruitment conversations with Hogan in recent months.

Those close to Hogan are skeptical he will ultimately decide to run for the Senate. So far, he has done nothing to prepare for a Senate campaign aside from agreeing to speak to his Republican recruiters.

Washington Republicans are betting that Hogan could break their losing streak in Maryland. He’s already won statewide office twice, including in 2018, an election year that favored Democrats nationally. He’s enjoyed strong approval ratings throughout his time in office.

But history suggests that appeal in statewide elections may not transfer to higher office.

Montana’s former two-term governor, Steve Bullock, was a prized Democratic recruit for Senate in 2020 who went on to lose his race by 10 percentage points in a campaign dominated by national issues.

Facing a similar dynamic and decrying partisanship in Washington, New Hampshire Gov. Chris Sununu in November resisted an aggressive lobbying push from McConnell and his allies and instead announced plans to seek another term as governor.