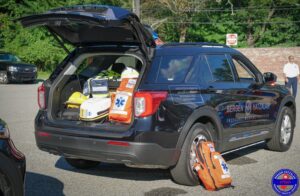 The New Jersey Department of Health’s Office of Emergency Medical Services recently inspected the operations of Bergen Hatzalah, completing the final step of its licensure process. Now, Bergen Hatzalah will be verified as a state EMS service.

Volunteer ambulance corps in New Jersey can operate without being licensed by the State Department of Health, but Bergen Hatzalah chose to pursue state licensure and the extra responsibilities it entails.

Bergen Hatzalah Chief Joshua Hartman told Hamodia the team planned on getting certified as they were setting up the medical service.

Many of began volunteering as EMTs while in New York, where the Hatzalah is licensed under the New York state Health Department.

Having official certification from the state’s authority would give the people calling confidence in their expertise, Hartman explained. “This sets the bar for highest level for pre-hospital patient care which is what we strive for,” Hartman said. “We chose to be under authority.”

The volunteers underwent background checks and fingerprinting  because as a state licensed EMS, Bergen Hatzalah would have “responsibility to have staff oversight,” Hartman said.