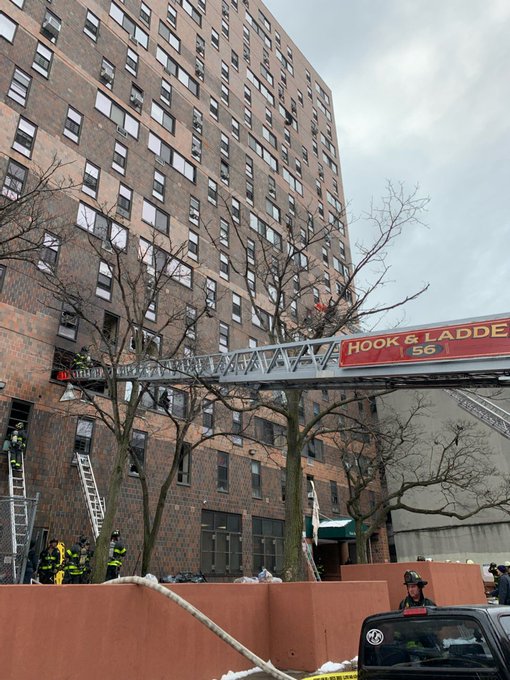 The FDNY said 63 people were injured in Bronx fire on Sunday, with 32 of the injuries life-threatening. At least 19 people died in the blaze, including 9 children. At least one firefighter was injured.

““The impact of this fire is going to really bring a level of pain and despair in this city,” Mayor Eric Adams said at a press conference. “This is going to be one of the worst fires we have witnessed in the City of New York in modern times.”

The cause of the blaze, at 333 E 181st St, a 19-story building in Fordham Heights, is currently unknown, but is not considered suspicious. FDNY Commissioner Daniel Nigro said during a press conference that it began in a third and second floor duplex, and soon spread throughout the building, with “very heavy smoke and very heavy fire.”

He said that the door to the apartment where the fire began was left open, causing smoke to escape and fill the entire building. The fire consumed the second and third floors.

Firefighters found victims on every floor in stairwells, some experiencing cardiac or respiratory arrest and had to be rushed to the hospital once they were rescued. All were suffering from severe smoke inhalation rather than burn injuries.

The blaze is “unprecedented in our city,” Nigro said. The last major fire in the city with such a high death toll occured in 1990, when a Bronx venue was targeted by an arsonist during a party; 87 people died when the fire blocked the only exit.

“We expect there to be numerous fatalities.”

In an afternoon press conference. Mayor Adams stated that thirty two people were in life threatening condition, and Commissioner Nigro said that victims were transported to five different hospitals.

Two hundred firefighters were at the scene battling the five-alarm fire, which began shortly before 11 a.m. It was extinguished around 2 p.m.

A neighborhood school was opened for residents so the American Red Cross could organize intake of those who were displaced by the fire and arrange for food, clothing and shelter for them.

This is an ongoing story.