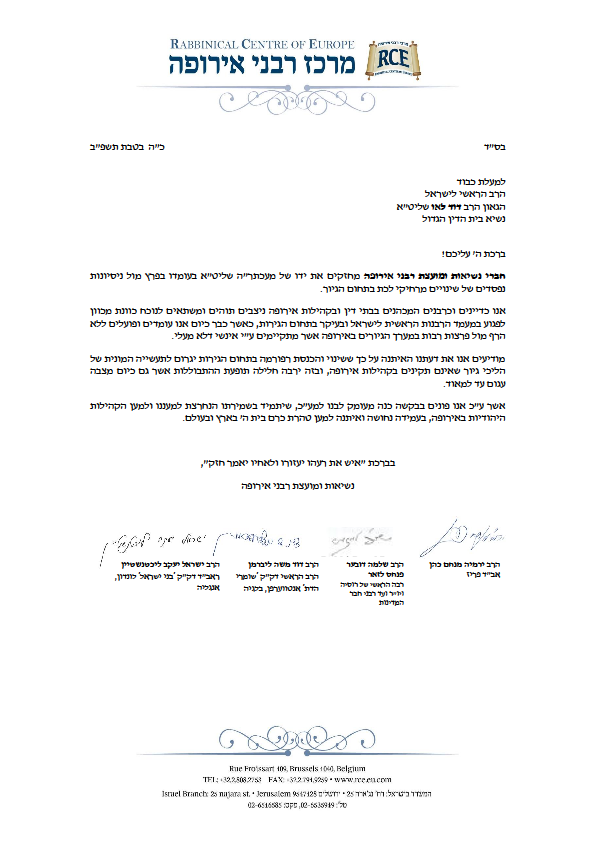 The Rabbinical Centre of Europe’s Presiding Council sent a letter to Chief Rabbi of Israel and President of the Rabbinical High Court, Rabbi David Lau, on behalf of hundreds of European Jewish communities. In the letter, the rabbis urge Rabbi Lau to uphold his strong position in order to prevent the disastrous attempts to undermine the sanctity of the Jewish people.

“We stand at your side as you strive to prevent these new reforms spearheaded by those who seek to breach our traditions, from gaining a foothold. Their attempts will bring a calamity on the Jewish nation in general, and European Jewry in particular,” the letter states.

As dayanim and Rabbis serving European religious courts, they note, they are looking on in alarm at the intentions to harm Israel’s Chief Rabbinate, especially with regard to conversions. The rabbis note that already at present, they are constantly working to combat many loopholes in the conversion system.

The European Rabbis made their opinion very clear: “We declare our staunch opinion that change of reform conversion will cause invalid mass conversions in European communities, further driving assimilation, which is still already on the rise.”

In conclusion, the Rabbis beseeched the Chief Rabbi to continue to stand strong against the serious attempts to create loopholes that threaten the existence of Jewish communities around the world. “As for us, we sincerely appeal from the bottom of our hearts, that you persevere with protection for us and for the Jewish communities, in a determined and steadfast way, for the purity of Kerem Beit Yisrael, in Israel and in the world.”

The letter is signed by the eminent rabbis of prominent cities and countries in Europe, who collectively represent hundreds of Jewish communities in the Diaspora.