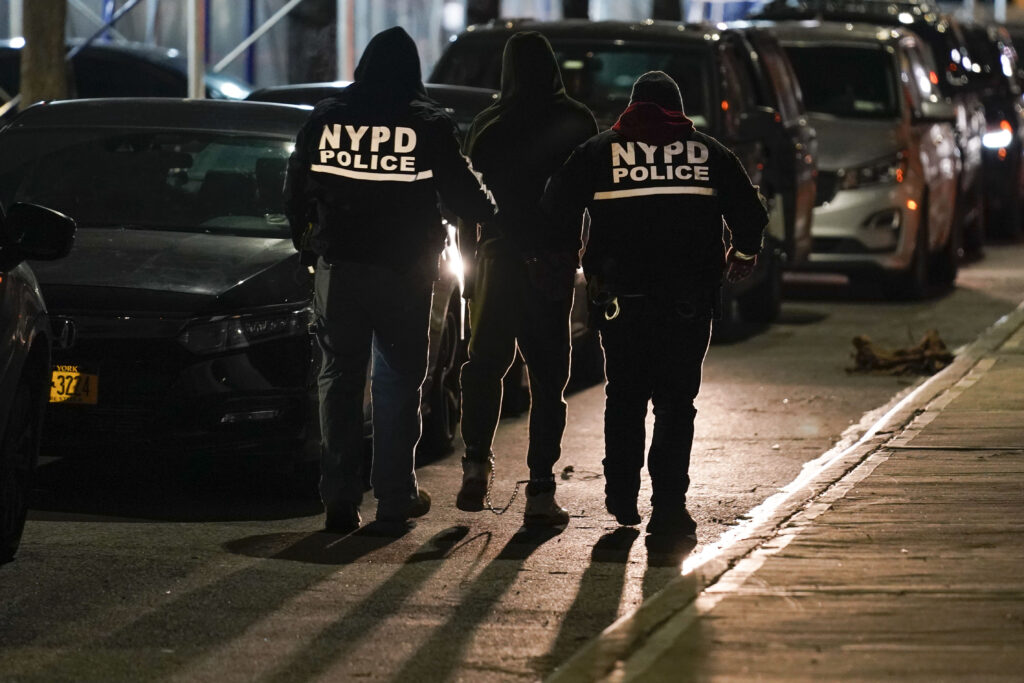 One suspected gang member was wanted for killing an 18-year-old college freshman as he ran from a bodega. Another was accused of wounding a college student while shooting at a gang rival.
The Associated Press got a rare, firsthand view Tuesday as New York City police officers conducted raids across Brooklyn in their fight against a pandemic-era increase in gun violence and homicides.

In all, police say 17 suspects were charged in crimes including 14 shootings and four deaths. Nine of the victims were bystanders not involved in any gang rivalry, police said.

Those arrested ranged in age from 17 to 23, but authorities said some had been as young as 14 when they got involved in the criminal conspiracies covered by the charges. Five are still under age 18.

Police said the suspects were members of one of three gangs that aligned to grow territory and punish rivals. Some of the suspects boasted about their exploits on social media and made posts directing others to commit violence, police said. Some of the shootings were captured on surveillance video.

In one bust in sub-freezing temperatures, officers in NYPD windbreakers converged on an apartment building in a public housing complex in Brooklyn’s Fort Greene neighborhood around 5 a.m.

Some officers climbed to the roof and pointed flashlights at the suspect’s window while other officers went to his door. One officer said knocking usually worked just fine, but a colleague carried in a sledgehammer just in case.

Within minutes, officers had three people in handcuffs.

Among them, two 17-year-olds: One charged with attempted murder in a September shooting in downtown Brooklyn that left a New York University student wounded in the arm and the other charged with murder in connection with the 2020 bodega shooting that killed 18-year-old Sherard McKoy.

Eight people were arrested in busts at other locations, police said. Four were already in jail on other charges. Two were in a juvenile detention facility. All arrests were made without incident, police said.

Police Commissioner Keechant Sewell, sworn in on Saturday, was briefed Monday on plans for the bust and said in an interview that she expected to see “significant results” from investigations that began on the watch of her predecessor, Dermot Shea.

New York City has been wrestling with a spike in violent crime since the start of the COVID-19 pandemic. After reaching a record low 292 homicides in 2017, the city hit 468 in 2020 and more than 480 last year. At the same time, shootings have surged, with more than 1,500 each of the last two years, according to police data.

Still, New York remains far safer than in the early 1990s, when there were more than 2,000 killings per year, or even through most of the decade after the Sept. 11 attacks.

“The No. 1 priority is to get this violence down,” NYPD Chief of Detectives James Essig told officers before Tuesday’s arrests.