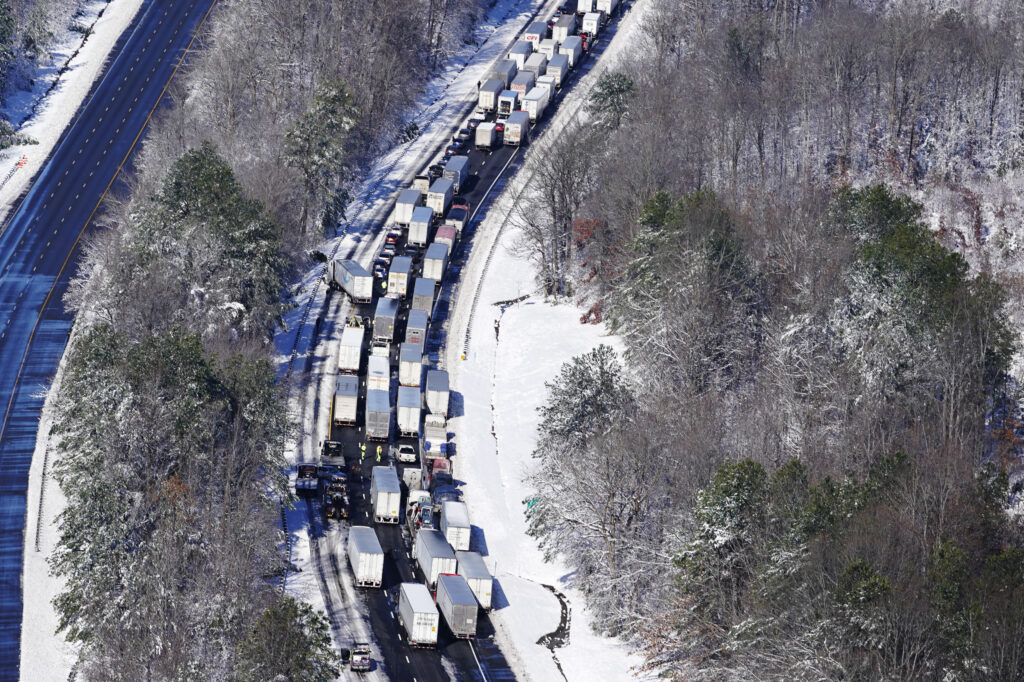 There was no food, water or sleep for Susan Phalen as she spent a frigid night inside her car stopped on Interstate 95 in Virginia. Meera Rao and her husband were only 100 feet past an exit but were unable to move for 16 hours.

Sen. Tim Kaine was on his way to Washington when a seemingly simple commute stretched into a 21-hour ordeal that became “a kind of survival project.”

They were among hundreds of people who got stranded on the East Coast’s main north-south highway in freezing temperatures after a winter storm snarled traffic and left some drivers stuck in place for as much as a full day.

The problems began Monday morning when a truck jackknifed on I-95, triggering a chain reaction as other vehicles lost control, state police said. Eventually lanes in both directions became blocked across a 40-mile stretch of the highway between Richmond and the nation’s capital at a time when snow was falling around 2 inches an hour.

Hundreds of motorists spent the night in their vehicles, worrying about a lack of food, fuel and water as temperatures fell into the teens. One family reported that they went more than 18 hours without eating.

There were no reports of serious injuries or deaths, but there was plenty of anger among drivers.

“No one came. It was just shocking,” said Rao, who was traveling home to Burtonsville, Maryland, after visiting her daughter in North Carolina when she got stuck Monday evening. “Being in the most advanced country in the world, no one knew how to even clear one lane for all of us to get out of that mess?”

It took until Tuesday evening around 8:30 p.m. for the Virginia Department of Transportation to reopen the interstate. Authorities had announced earlier in the evening that all stranded motorists had made it off the highway. Transportation officials then oversaw the removal of remaining abandoned vehicles and making sure the entire stretch was plowed.

As stranded motorists waited in their cars, many posted desperate messages on social media. Between midnight and 3 a.m. Tuesday, traffic came to a complete standstill, state officials said.

Gov. Ralph Northam said his team responded through the night by sending emergency messages to connect drivers with help and working with local officials to set up warming shelters as needed. Officials told reporters crews were helping distribute food, water and fuel.

Finally, around midmorning Tuesday, a tow truck driver appeared and cleared away snow, allowing the Raos and other cars back up and take the exit.

People who were stranded and their families lashed out at Northam on social media, asking why the Virginia National Guard was not deployed.

Northam said in an interview that he opted not to request National Guard help because the issue facing state crews was not a lack of manpower but the difficulty of getting workers and equipment through the snow and ice to where they needed to be. He said that effort was complicated by the disabled vehicles, freezing temperatures and ice.

The affected section of the interstate was not pretreated because heavy rain preceded the snow, which fell at times as fast as 2 inches an hour, said Marcie Parker, a state Department of Transportation engineer.

“That was entirely too much for us to keep up with,” she said.

The storm also left passengers on an Amtrak train stranded in Virginia. Amtrak’s Crescent left New Orleans on Sunday on its way to New York and got stuck near Lynchburg on Monday morning, when downed trees blocked the tracks.

Passenger Sean Thornton told AP that Amtrak provided food, but toilets were overflowing and passengers were furious. Amtrak planned for the train to complete its trip once the tracks are clear.

Up to 11 inches of snow fell in the area during Monday’s blizzard, according to the National Weather Service, and state police had warned people to avoid driving unless absolutely necessary, especially as colder nighttime temperatures set in.

Compounding the challenges, traffic cameras went offline as much of central Virginia lost power in the storm, the transportation department said.

Kaine left his home in Richmond for his usual two-hour commute to the U.S. Capitol after Monday’s snowstorm, expecting to preside over the Senate on Tuesday morning. Instead, he spent the night alone in his car on I-95.

The Democrat told Washington radio station WTOP that he worried about all the families with children or elderly passengers who were running out of fuel and food. But Kaine also described a camaraderie as strangers connected along the highway, including a Connecticut family who walked up and down lines of stopped cars, sharing a bag of oranges they had planned to bring home from a Florida vacation.

“I’ve never seen anything like it,” Kaine said. “I will never forget this.”

Phelan’s planned one-hour drive from her parents’ house turned into a 16-hour nightmare. She said at some point during the gridlock, she thought she might have to start knocking on windows asking other drivers for water. But she, too, witnessed acts of kindness among the stranded drivers, saying “everybody was helping everybody.”

Kelly Hannon, a spokeswoman for the transportation department, apologized to motorists and said the department would take an “exhaustive look” at the incident.