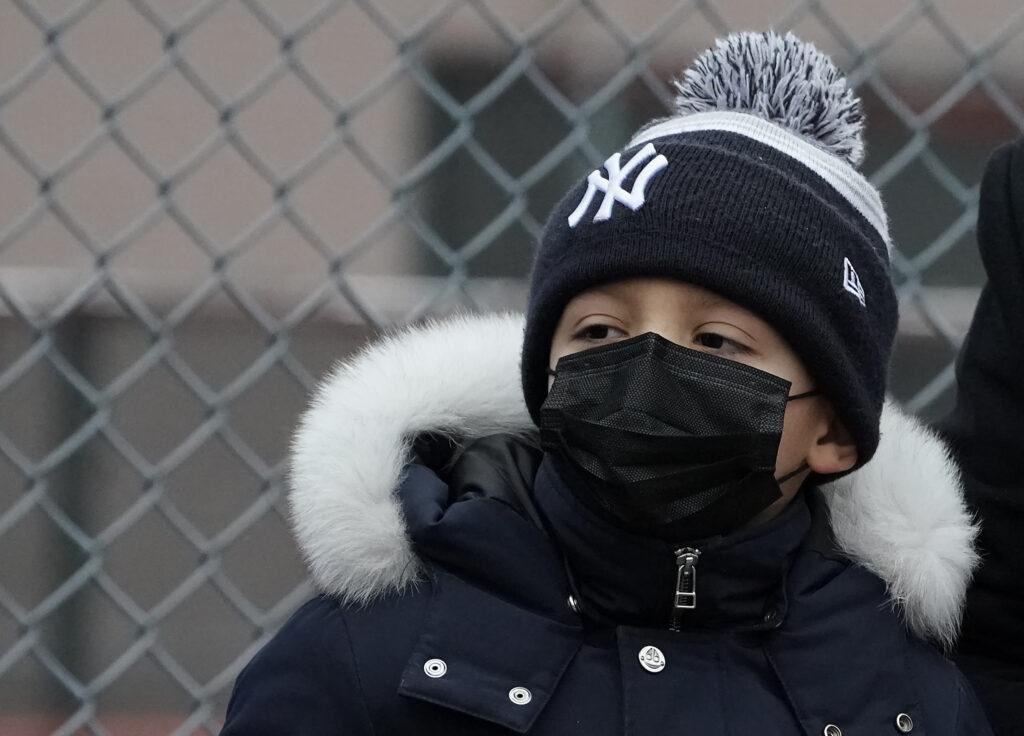 “We’re not in a good place,” the Democratic governor said bluntly in a news conference in Rochester, describing a hospital workforce that has been stretched to its limit and upstate intensive care wards that are running out of space. “This is not that wave that we saw last year that kind of went up and up. This is straight up.”

She signaled that efforts to keep schools running remained her top priority, and expressed hopes for a brief if brutal period, noting that cases spiked and then fell suddenly in South Africa’s initial run-in with the omicron strain.

Hochul said case rates will likely continue to rise after New Year’s Eve gatherings across the state. In Monroe County, where Hochul spoke, less than 2% of ICU beds were available at the start of the year, she said.

The state’s COVID-19 hospitalization count hit 9,563 on Monday, spiking by more than 70% in a single week. At its peak last year, which came in mid-January, the tally touched 9,273.

The count on Monday was about half as many as at its height in April 2020, the gloomiest period of the pandemic, when New York City was the epicenter of the global crisis.

“We have many more defenses this time,” Hochul said in the news conference, which was held at a state-run vaccination site. “The vaccines are so plentiful.”

Hochul also said the state’s testing capacity had grown significantly, a crucial cog in efforts to keep schools open. On Friday, she outlined a raft of measures, billed as “Winter Surge Plan 2.0,” to battle the latest pandemic front.

The blueprint included an extension of the state’s mask mandate into February, the deployment of 50 extra ambulance teams from the federal government to New York City and a testing blitz targeting schools.

“We saw the storm brewing, and we ordered a lot of test kits,” Hochul said, noting that more than 5 million diagnostics had landed in schools. “Our highest priority with those test kits is school districts.”

Most classrooms across the state reopened on Monday despite teacher shortages. But not every school district statewide managed to pull off the feat: the Syracuse school system, which serves more than 20,000 students, canceled classes, citing a shortage of staff.

The Syracuse School District said in a statement that it faced a “lack of substitutes” to cover for sick teachers.

Hochul, who has painted remote learning efforts as a “failed experiment,” has moved in lockstep with New York Mayor Eric Adams to maintain in-person class. Both leaders noted on Monday morning that school settings offer greater safety from spread than other spaces.

“My view is every child should be back in school unless they’re testing positive,” Hochul said. “Teachers, god bless ya for showing up and making sure you’re vaccinated.”

At an elementary school in the Bronx, Adams said: “We want to be extremely clear. The safest place for our children is in a school building, and we are going to keep our schools open.”

Transmission rates in schools have been low during the pandemic, according to research. But the Centers for Disease Control and Prevention has warned that staff-to-staff transmission has appeared to be higher than student-to-student spread, at least prior to the vaccination rollout.