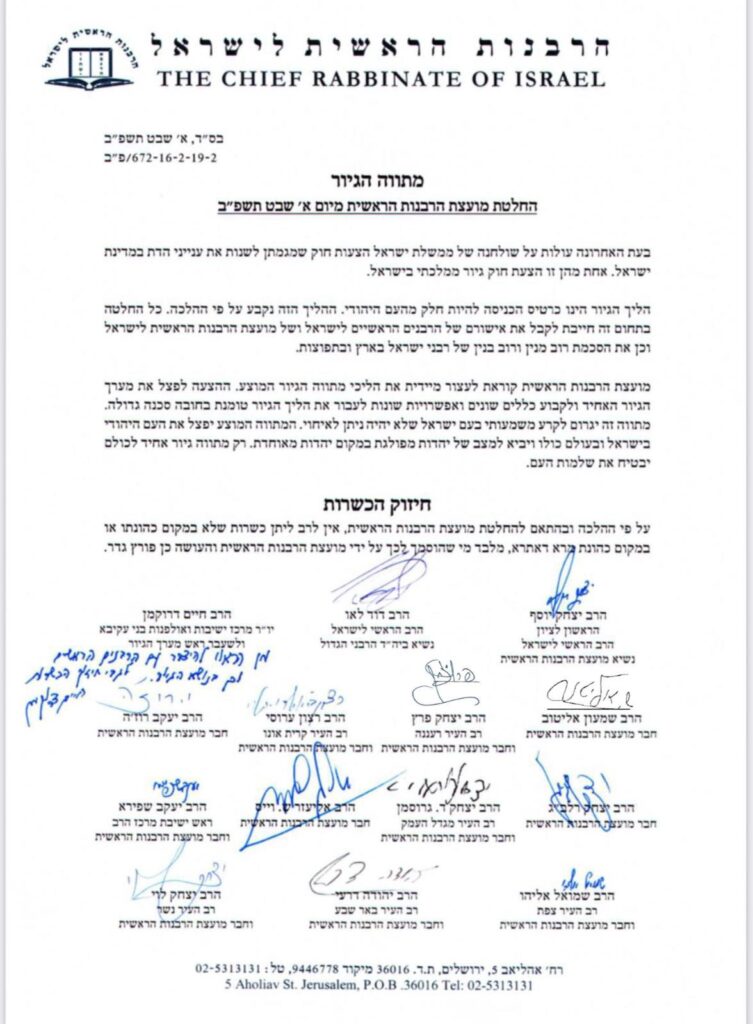 The senior leader of the Religious Zionist community, Rabbi Chaim Druckman, attended a meeting of the Chief Rabbinate Council on Monday, which aims to form a joint religious front against the conversion plan led by Minister of Religious Affairs Matan Kahana.

There have been various reports about Rabbi Druckman’s position on the issue of conversion, with Kahana claiming that Rabbi Druckman supported the outline he presented and would also allow city Rabbanim to oversee conversion.

The decision of the Chief Rabbinate Council Council was also signed by Rabbi Druckman, in which they express outright opposition to the conversion reform of Kahana.

The decision reads, “The conversion process is an entry ticket to be part of the Jewish people. This procedure is determined by halachah. Any decision in this area must be approved by the Chief Rabbis of Israel and the Chief Rabbinate of Israel, as well as the consent of the majority of Israeli Rabbanim.

“The Chief Rabbinical Council calls for an immediate halt to the proposed conversion outline,” the resolution said. According to the Rabbanim, “the proposal to split the uniform conversion system to establish different rules and different options to go through the conversion process entails a great danger.”

The Rabbanim warn that “this outline will cause a significant rift in the people of Israel that cannot be reconciled. The proposed outline will split the Jewish people in Israel and around the world and lead to a situation of divided Judaism instead of united Judaism. Only a uniform conversion outline for all will ensure the yichus of the people.”

Regarding the kashrus reforms, the Rabbanim’s decision was: “According to halachah and in accordance with the decision of the Chief Rabbinate Council, a Rav may not authorize kashrus outside his place of office or in place of the local Rav, except for those authorized by the Chief Rabbinical Council to do so.”