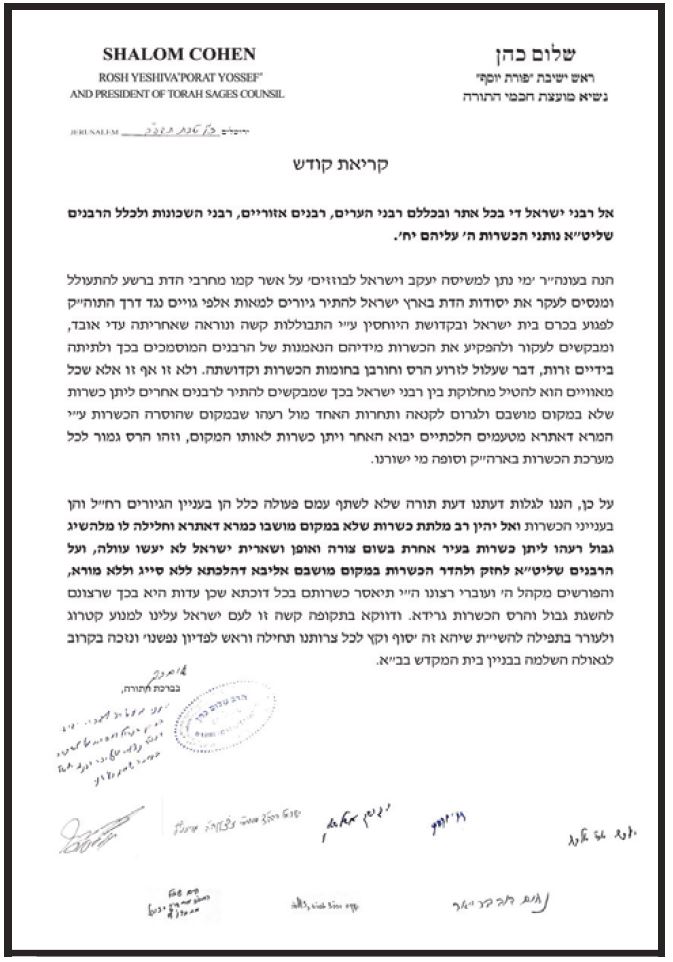 The kashrus reform initiated by Kahana officially began on Sunday. Businesses may now choose any municipal Rabbi to grant them a license, and do not have to choose the Rav of their locale.

The Gedolim, in their letter, define it as “destruction and devastation in the walls of kashrus. All they want is to create a dispute among the Rabbanim by seeking to allow other Rabbanim to certify kashrus  outside their localities and cause competition against each other.”

On the subject of the conversion reforms, the Gedolim also speak sharply and define the government ministers and its leaders as the “destroyers of religion” who try to ruin the very foundations of religion in Eretz Yisrael by allowing conversions of hundreds of thousands of gentiles.

In a clear instruction, the Gedolim warn and write: “We are here to express our opinion, da’as Torah, not to cooperate with them at all both in the matter of conversions and in matters of kashrus. A Rav shall not give a hechsher that is not in his place of residence and chalilah for him to be masig gevul of another Rav to give a hechsher in another city in any way. The Rabbanim are called to strengthen the kashrus in their place of residence without reservation and without fear.”

The Gedolim warn those who cooperate with the reforms in kashrus will have their hechsher will be forbidden in any place.