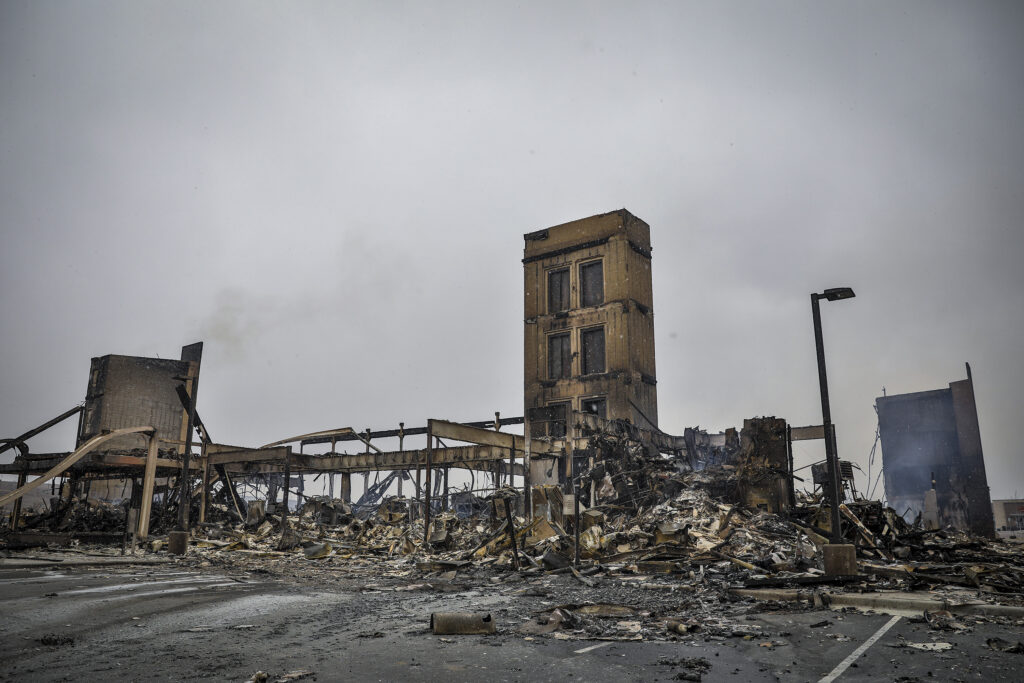 Three people are missing and feared dead in the wake of the Marshall fire, the Boulder County sheriff said Saturday, and nearly 1,000 structures have been destroyed, making the blaze by far the most destructive in Colorado history.

Two of the three missing persons are in Superior, and the third is in the Marshall area, Sheriff Joe Pelle said. He said the search is likely a recovery one, meaning authorities are looking for remains. The missing people’s homes have been destroyed, he said, and cadaver dogs will be brought in Sunday. The debris and snow have “hampered substantially” efforts to search for the missing.

“Right now, it’s not even safe to step into the scene,” he told reporters.

The sheriff said two other missing persons reports have been resolved successfully. He said it was “miraculous” that hundreds of people weren’t missing.

Pelle said those numbers are not a final tally but are “very close” to final. Asked if there were still active hot spots, Pelle said no, but he added there were areas of heat in the burn zone and in destroyed buildings.

“I expect that we’ll see smoke and maybe some rekindling for a period of a few days,” he said.

The sheriff said authorities have not found “any credible evidence” of downed power lines in the area, though telecom lines — which could not have started the fire — were found. Initially, many believed that power lines toppled by high winds had sparked the blaze.

A preliminary list of destroyed structures released by Boulder County on Saturday shows several businesses, including a Subway, the Havana Manor cigar lounge and a La Quinta Inn, all in Louisville. In Superior, damage buildings include the Chuck E. Cheese, where a video posted to social media Thursday showed panic parents watching smoke creep closer. The town hall was damaged, as was the Target and a Tesla dealership. The Element Hotel was destroyed.

But the bulk of the list are home addresses, entire stretches of which appear wiped out. Every home on West Mulberry between 802 and 824 in Louisville. Dozens of homes, primarily on the 900 block, of St. Andrews Lane.

Law enforcement has received multiple tips about what caused the fire, Pelle said; one of those spurred the execution of a search warrant on a property in the county. He declined to provide any further details on that specific investigation.

He said the cause of the blaze is still being investigated and that he has no “credible, hard” information about the cause. He called it a “very active” investigation that involves local, state and federal authorities.

“We’re looking into the cause and origin of the fire, and if it turns out to be arson or reckless behavior with fire, we’ll take appropriate action,” Pelle said. “It was a red-flag day, the day of the fire, so there shouldn’t have been any burning of anything.”

9News reported Friday evening that one of the missing people is Nadine Turnbull, citing her grandson, Hutch Armstrong. Turnbull was reported missing after Armstrong’s cousin said he couldn’t get her out of their home in Old Town Superior.

“They tried to go out the front door with the neighbor,” Armstrong told 9News. “It was engulfed. Check the back door it was engulfed.”

Armstrong said his cousin tried to go back for Turnbull, but firefighters pulled her away.

Louisville Police Chief David Hayes said Saturday morning that residents will be allowed back into “soft closure” areas and that ID cards will be needed to gain entry to those areas.

“Also, please be prepared to see your community change in ways that you did not expect,” he said.

Pelle said the “number one goal” is to get people back into their homes as quickly as possible. “Many parts of Louisville and Superior” are being reopened this afternoon.