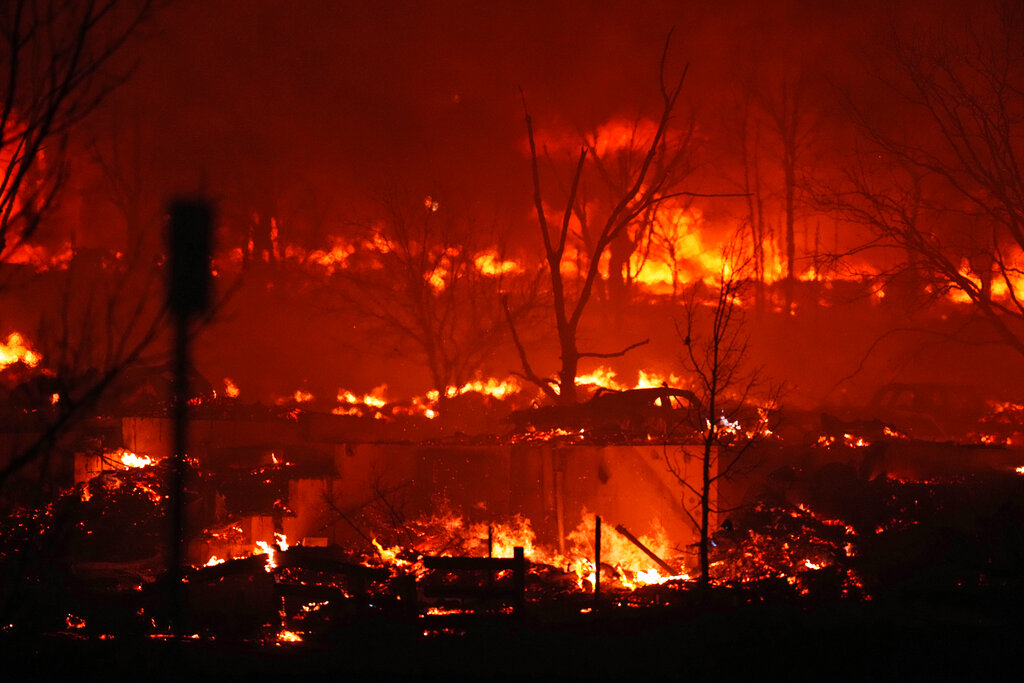 Tens of thousands of Coloradans driven from their neighborhoods by wind-whipped wildfires anxiously waited to learn what was left standing of their lives Friday after the flames burned an estimated 580 homes, a hotel and a shopping center.

At least one first responder and six other people were injured in the blazes that erupted outside Denver on Thursday morning, unusually late in the year, following an extremely dry fall and amid a winter nearly devoid of snow so far.

Boulder County Sheriff Joe Pelle, who gave the early damage estimate, said there could be more injuries — and also deaths — because of the intensity of the fires, propelled by winds that gusted up to 105 mph.

“This is the kind of fire we can’t fight head-on,” Pelle said. “We actually had deputy sheriffs and firefighters in areas that had to pull out because they just got overrun.”

By first light Friday, the towering flames that had lit up the night sky were gone, leaving smoldering homes and charred trees and fields. The winds had died down, and light snow was in the forecast, raising hopes it could prevent flare-ups.

The neighboring towns of Louisville and Superior, situated about 20 miles northwest of Denver and home to a combined 34,000 people, were ordered evacuated ahead of the fires, which cast a smoky, orange haze over the landscape.

The two towns are filled with middle- and upper-middle-class subdivisions with shopping centers, parks and schools. The area is between Denver and Boulder, home to the University of Colorado.

Residents evacuated fairly calmly and in orderly fashion, but the winding streets quickly became clogged. It sometimes took cars as long as 45 minutes to advance a half-mile.

Small fires cropped up here and there in surprising places — on the grass in a median or in a dumpster in the middle of a parking lot — as gusts caused the flames to jump. Shifting winds caused the skies to turn from clear to smoky and then back again as sirens wailed.

The first fire erupted just before 10:30 a.m. and was “attacked pretty quickly and laid down later in the day” with no structures lost, the sheriff said. A second blaze, reported just after 11 a.m., ballooned and spread rapidly, Pelle said. It covered at least 2.5 square miles.

Some of the several blazes in the area were sparked by downed power lines, authorities said.

Ninety percent of Boulder County is in severe or extreme drought, and it hasn’t seen substantial rainfall since mid-summer.

“With any snow on the ground, this absolutely would not have happened in the way that it did,” said snow hydrologist Keith Musselman.

Guanella said he heard from a firefighter friend that his home was still standing Thursday night. But he could only wait and see.