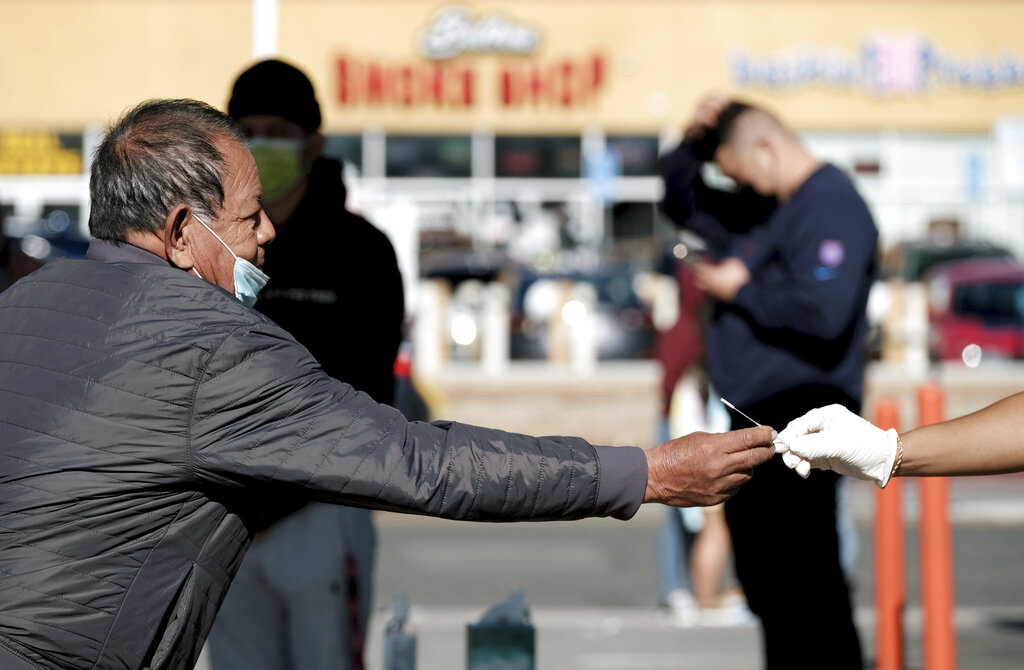 The United States is reporting the highest seven-day average of new coronavirus infections than at any point of the pandemic as the highly transmissible omicron variant continues surging across the country and into the new year.

As of Thursday, the nation’s seven-day average was 343,172 new cases a day, according to data tracked by The Washington Post. Single-day reports indicated that case counts may have hit more than 560,000 on Thursday — doubling the highest daily totals from last winter — but those numbers are not as reliable as the seven-day average. Case numbers reported by states on a single day might not necessarily be all from one day, especially during the holidays, which is why The Post generally relies on seven-day averages. While the high volume of tests and staff shortages could play a role in the country reporting a single-day spike in cases, the rapid surge in infections from omicron over the past two weeks underscores what is now the most infectious period of the pandemic.

“It’s unlike anything we’ve ever seen, even at the peak of the prior surges of covid,” James Phillips, the chief of disaster medicine at George Washington University Hospital, told CNN.

The nation’s seven-day average for new cases has increased by 82 percent compared to the previous seven days, Post data shows. While deaths and hospitalizations are also up nationwide, they are not increasing at the rate of new cases. CDC Director Rochelle Walensky said this week that hospitalizations remain “comparatively low,” noting that those totals tend to lag behind infections by about two weeks. She emphasized that omicron appears to cause milder symptoms, especially for vaccinated people.

The news of the spike in the seven-day average comes as U.S. health officials discourage large New Year’s Eve gatherings. Anthony Fauci, the White House’s chief medical adviser, has urged Americans to rethink party plans and encouraged smaller gatherings to help prevent the spread of the virus. New York is among the cities set to forge ahead with outdoor festivities despite the warning, though it will be smaller than usual.

There is, however, some optimism heading into 2022. The Food and Drug Administration is expected by early next week to authorize booster shots of the Pfizer-BioNTech coronavirus vaccine for 12- to 15-year-olds. Infectious-disease experts also estimate that the spike in new cases from omicron, the country’s dominant variant, could peak by mid-January.

There is hope that there will be a swift decline in cases like there was in southern Africa, where omicron was first detected in late November. Cases in South Africa spiked quickly, then dropped with unexpected speed after a modest rise in hospitalizations.

“Omicron will likely be quick. It won’t be easy, but it will be quick,” William Hanage, an epidemiologist at the Harvard T.H. Chan School of Public Health, wrote in a Thursday email to The Post. “Come the early spring, a lot of people will have experienced covid.”

As the world says goodbye to 2021 and hello to 2022, some public health experts are warning of potential omicron-fueled disruptions to public life that might make the new year sound more like 2020. Michael Osterholm, an infectious-disease expert at the University of Minnesota, told MSNBC on Thursday that the rise in cases in recent days signals that the country could “have a hard time keeping everyday life operating.”

“The next month is going to be a viral blizzard,” he said.