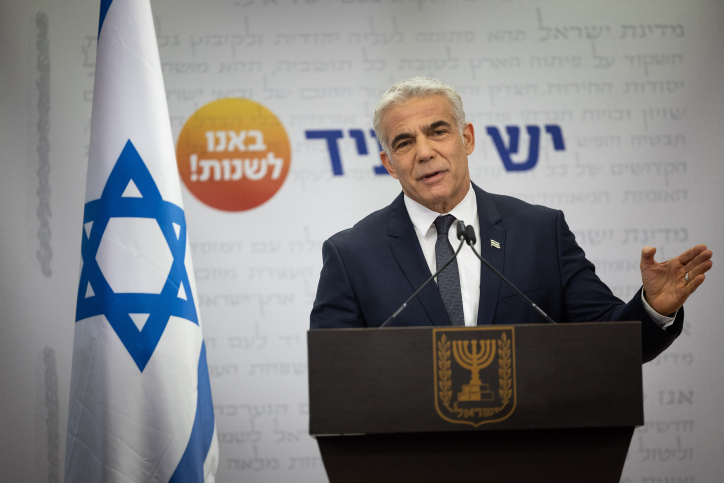 Against the backdrop of the resumption of talks between world powers on reviving the 2015 nuclear deal, Foreign Minister Yair Lapid said on Monday that “Israel will not allow Iran to become a nuclear threshold country.”

He added that while the government “prefers to act with international cooperation,” Israel won’t hesitate to act independently if necessary.

Lapid noted that as nuclear talks between European powers and Iran resume in Vienna, “stopping Iran’s nuclear program is the primary challenge for Israeli foreign and security policy.”

“In recent months, we’ve engaged in an intensive dialogue with all the countries involved in these negotiations. Naturally, primarily with the United States, but not only. I’ve traveled to Moscow, Paris, London, and of course, Washington. We have told everyone clearly: Israel will not let Iran become a nuclear threshold state. Certainly, we prefer to act through international cooperation, but if necessary – we will defend ourselves, by ourselves,” he underscored.

Israel has presented its allies with “quite a bit of clear-cut intelligence, not just opinions and positions, but intelligence that proves that Iran is systematically deceiving the world,” he warned.

“All Iran cares about is the lifting of sanctions, allowing for billions of dollars to pour into their nuclear program, Hezbollah, Syria, Iraq and the terrorist network they have deployed around the world. Israel does not oppose any agreement. A good agreement is a good thing. We do oppose an agreement that does not promise real oversight of the Iranian nuclear program and Iran’s money and terrorist network,” he explained.

Israel fears a deal that will release the sanctions on Iran while enabling it to eventually develop its nuclear program and fueling its global terrorism network.